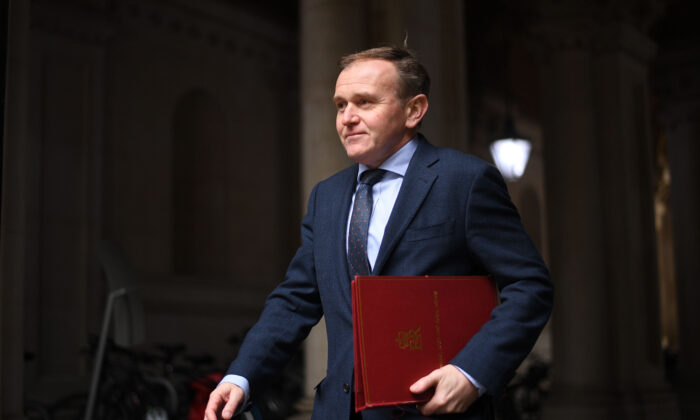 Russia said on June 23 that it fired shots and dropped bombs in the path of the UK’s HMS Defender near Cape Fiolent, a landmark on the southern coast of Crimea near the port of Sevastopol, headquarters of the Russian Navy’s Black Sea fleet.

Russian media quoted the defense ministry as saying the ship ventured as much as three kilometers (two miles) inside Russian waters before leaving.

The UK has denied Russia’s claim, saying that the Russians were undertaking a gunnery exercise and that no shots had been fired at the British Warship, which was “conducting innocent passage through Ukrainian territorial waters.”

Russia seized and annexed the Crimea peninsula from Ukraine in 2014, and it considers areas around the peninsula’s coast to be Russian waters. Western countries consider the peninsula to be part of Ukraine and have rejected Russia’s claim to the seas around it.

The UK’s Secretary of State for Environment, Food, and Rural Affairs George Eustice said on June 24 that the British warship was taking a “logical route.”

“Under international law, you can take the closest, fastest route from one point to another. HMS Defender was passing through Ukrainian waters, I think on the way to Georgia, and that was the logical route for it to take,” he told Sky News.

Eustice said the practice is “very normal” and “quite common.”

“What was actually going on is the Russians were doing a gunnery exercise. They had given prior notice of that. They often do in that area,” he said, adding that it’s important that people don’t get carried away.

Asked if the government would do it again, Eustice replied: “Of course, yes.

“We never accepted the annexation of Crimea, these were Ukrainian territorial waters.”

Speaking to ITV’s “Good Morning Britain” program, Eustice said that he doesn’t know if the gunnery exercise was the “official reason” given for the Russian activities.

“Whether that was cover for them to try and make some point, we don’t know,” he said. “Perhaps it was, perhaps it wasn’t.”

Former Royal Navy Chief Admiral Lord Alan West told the London Broadcasting Company that “there’s no doubt the Defender was asserting her right of innocent passage from one port to another.”

He said Russian President Vladimir Putin was “an expert at disinformation,” and that his “appalling” behavior was to show his toughness to his “home audience.”

Former head of the Army, Gen. Lord Richard Dannatt, said that Putin is “testing the will of the West.”

“I’m a little bit surprised that the Ministry of Defence is playing it down,” he told Sky News.

“It was unreasonable of the Russians to challenge HMS Defender in the way that they did.

“The underlying point is that there are international laws that must be upheld by everyone, and HMS Defender had the absolute right to be where she was yesterday.”

Earlier on June 24, the UK’s Foreign Minister Dominic Raab said that the Russian characterization of the event is “predictably inaccurate,” and Russia summoned the British ambassador in Moscow, Deborah Bronnert, over the row.

Kremlin spokesman Dmitry Peskov said on June 24 that the incident was “a deliberate and premeditated provocation” and threatened that “no options can be ruled out.”