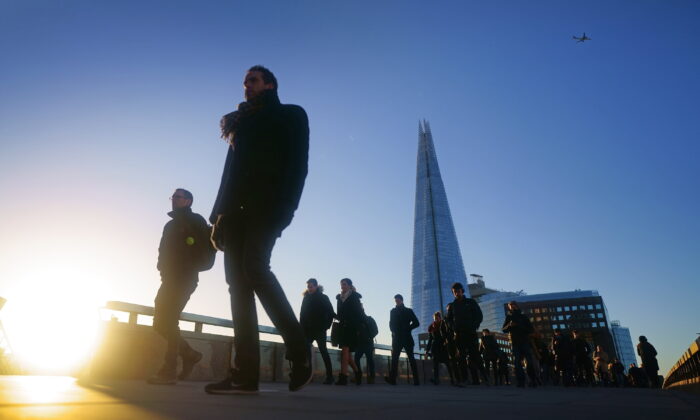 UK workers saw a record drop in real earnings over the past quarter despite pay increases amid soaring inflation, according to official figures published on Aug. 15.

The Office for National Statistics (ONS) stated that regular pay (excluding bonuses) between April and June was estimated to have increased by 4.7 percent compared to the same quarter last year.

However, after adjusting for inflation, regular pay plummeted by 3 percent year-over-year, the biggest drop since the record began in 2001.

Total pay (including bonuses) from April to June increased by 5.1 percent, but in real terms, it represents a 2.5 drop after taking inflation into account. It’s the biggest real total pay drop since the three-month period between February and April 2009.

The drop comes as the UK’s inflation rate hit 9.4 percent, a 40-year record, in June and is expected to peak at roughly 11 percent later this year.

The employment rate between April and June has remained stable compared to the previous quarter, while the total number of people working has increased.

However, the number of employed people aged 16 years and older increased by 160,000 in the quarter.

The number of payrolled employees kept increasing, reaching a record high in July at 29.7 million people, according to a provisional estimate by the ONS. The number of self-employed workers remained low but has seen a slight increase.

The number of job vacancies fell for the first time since June to August 2020, but it’s still at record high levels.

Statistician: No Cause for Alarm Yet

Jamie Jenkins, former head of health analysis and labour market analysis at the ONS, said nothing is currently a cause for alarm in the labour market, but the situation may change if inflation persists.

Since July, unions staged more than a dozen strikes across sectors, including rail, postal service, communications, and legal, demanding increases in pay to keep up with inflation.

Jenkins told The Epoch Times that increasing workers’ pay would have its own difficulty because businesses hit with higher wage costs will have to pass the cost to the consumer, which “then embeds inflation into the long term.”

While the UK’s economy was estimated to have shrunk by 0.1 percent in the second quarter, Jenkins said the country isn’t yet seeing the kind of “doom and gloom with recessions hitting the overall labour market.”

“The labour market indicators are pretty buoyant overall apart from the wages,” Jenkins said. “Wages are going up, but inflation is so high it’s difficult to keep up with that. But I don’t think there’s cause for alarm in the labour market stats.”

What could be a cause for alarm is embedded inflation, mainly driven up by soaring energy prices, according to Jenkins.

“We do know there’s at least 20 percent of households haven’t got the money to pay these increased bills that are forecast to hit during the autumn and winter. If they cut back on going out and spending, that will then reduce the demand that could then see us hit the recession,” Jenkin said, noting that this may lead to “the labour market turn the other way” next spring.

In an emailed statement to The Epoch Times, Jane Gratton, head of people policy at the British Chambers of Commerce, called the unfilled vacancies a “ticking timebomb” for businesses, saying that “skills and labour shortages have reached crisis point for many firms.”

Gratton urged the government to include more jobs in the shortage occupations list so foreign workers can fill the gap while businesses train and upskill their workforce. She also called for encouragement for economically inactive people to get into the labour market.

Asked if the UK has enough workers to fill the job vacancies, Jenkins said he believes that there are “plenty of people in the country,” while skills mismatch is part of the challenge.

“One of the things over the last 25 years in the UK has been large amounts of people going into university, and we haven’t really focused so much on delivering the skills and the apprenticeships to fill a lot of different roles, and the labour market is evolving and changing,” he said. “So if you take 30 years ago with the types of jobs that were being done in the UK, it’s different [from] what we’ve got now.”

Jenkins said the government and employment bodies need to look at these issues in the short term, and immigration can also fill some of the roles, although it can also bring downward pressure on wages.