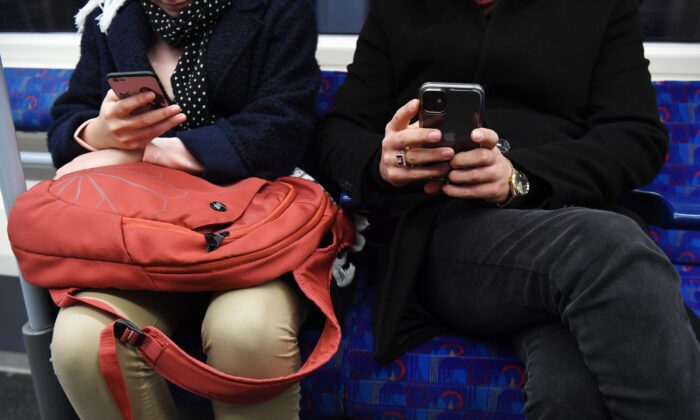 A close-up of an unidentifiable man and woman sitting next to each other on the Tube, both looking at their phones. ((Kirsty O’Connor/PA Media)
UK

Women in England and Wales who experience street or cyber-flashing, up-skirting, or other forms of harassment were urged on Monday to report such incidents to the police.

It comes as the Crown Prosecution Service (CPS) published new prosecution guidance on public order offences including a “specific chapter on charges relating to public sexual abuse” to clarify the law around potential offences.

A number of specific offences were highlighted by the prosecutors, such as exposure of genitals with the intention to cause alarm or distress; taking a photo or video under someone’s skirt without their consent to humiliate, alarm, or distress the victim, or gain sexual gratification; sending unsolicited sexual images to strangers in public places via data sharing services such as Bluetooth or Airdrop; or intentionally causing harassment, alarm, or distress by using threatening, abusive, or insulting words or behaviour.

The CPS cited a report (pdf) published last year by the All-Party Parliamentary Group (APPG) on U.N. Women, which included a survey suggesting 71 percent of women in the UK had experienced sexual harassment and 95 percent of them didn’t report their experience.

Siobhan Blake, CPS national lead for Rape and Serious Sexual Offences, said it was “sickening” that almost three-quarters of women had been “subjected to this disgusting behaviour” and “equally concerning” that few incidents were reported.

“The law is clear that if someone exposes themselves, tries to take inappropriate pictures, or makes you feel threatened on the street, these are crimes and should not be dismissed,” she said.

The survey included in the 2021 APPG report, which had a sample size of 1,089 women, included a wide spectrum of experiences ranging from being threatened, coerced, or forced into participating in sexual behaviour; to being cat-called, wolf-whistled, or stared at in a way that made one feel unsafe or uncomfortable.

Asked whether the new guidance would result in an increase in the prosecution of cat-calling cases, Siobhain Egan, director at Lewis Nenas Law, told The Epoch Times that while there are “any number of existing statutes” to deal with most offences referred by the CPS, “some of these, like upskirting and cyber-flashing, will be easier for the Crown [Prosecution Sevice] to prove than cat-calling.”

Egan also said UK police “really do not have the resources to even attempt to keep up with the vast number of offences committed against women as it is,” and questioned the force’s ability to deal with the “potential tsunami” of cases if people start to report incidents such as cat-calling.

In an email to The Epoch Times, the CPS said a “one-off incident” of cat-calling or wolf-whistling is “unlikely to amount to an offence” as there is “no specific law” criminalising such behaviour.