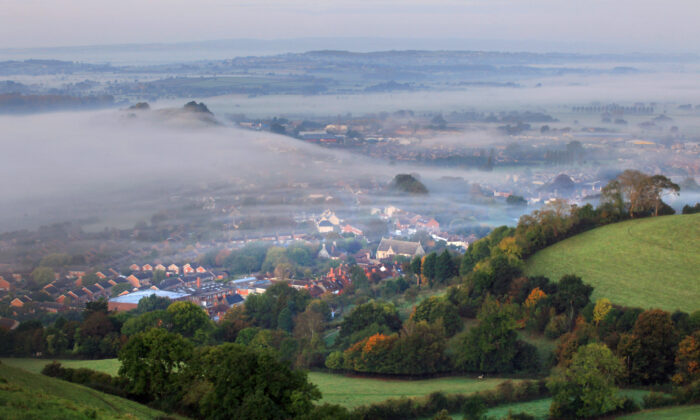 The sun begins to rise over the morning mist above the town of Glastonbury on Oct. 13, 2009. (Matt Cardy/Getty Images)
UK

A woman has been arrested on suspicion of murder after a man was killed in a house in Glastonbury over the Easter bank holiday.

Police were called by the ambulance service to an address in Chilkwell Street in the Somerset town at 11.43pm on Monday after reports that a man had been stabbed.

The man was found with serious injuries and died at the scene a short time later, Avon and Somerset Police said on Tuesday.

A forensic post-mortem examination to determine the exact cause of death will take place in due course, the force said.

The suspect was found inside the property, also suffering from stab wounds.

She was taken to hospital for treatment and has since been arrested on suspicion of murder, a police spokesman said.

Chief Inspector Andrew Pritchard said: “We fully understand how shocking this will be for the local community and we’d like to reassure them a thorough investigation is already being carried out, led by detectives from our Major Crime Investigation Team.

“We’re working hard to establish the full circumstances which led to the tragic death of a man and, while our inquiry is at a very early stage, we are confident this is an isolated incident.

“Efforts to confirm his identity and locate his next of kin are ongoing as we look to inform them of his death as soon as we can.”

Mr Prichard added: “A forensic tent is currently in place outside the property while specialist crime scene investigators examine the area.

“A road closure is also in place at the A361 roundabout connecting Chilkwell Street and Bere Lane, and we’d like to thank people for their patience while we respond to this awful incident.

“Residents will continue to see increased levels of police activity while inquiries are carried out, and we’d encourage anyone with concerns to speak to an officer from the local neighbourhood policing team, which will be carrying out additional reassurance patrols.”

Anyone with any information is urged to contact police on 101 quoting reference number 5222091818.