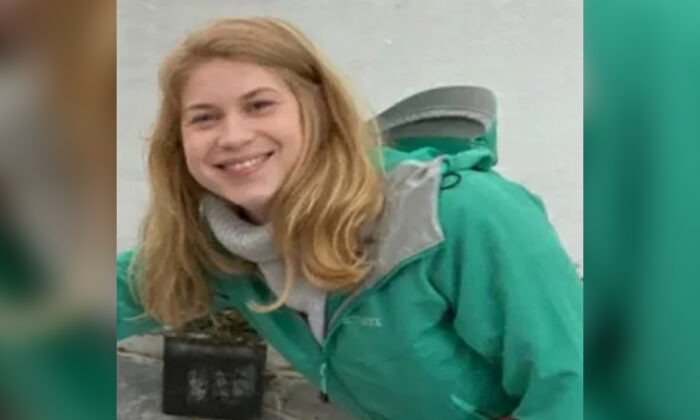 Sarah Everard, wearing the coat she wore on the night she went missing. (Met Police)
UK

UK Woman Arrested Under COVID-19 Rules Before Being Murdered by Police: Court Hearing

The former British police officer who raped and murdered Sarah Everard in March kidnapped his victim by using his Metropolitan Police-issue warrant card to make a fake COVID-19 arrest, a court has heard.

Everard, a 33-year-old marketing executive, was walking home in the evening on March 3 after having dinner at a friend’s house in Clapham, south London, when she was kidnapped by then firearm officer Wayne Couzens.

The 48-year-old has pleaded guilty to kidnap, rape, and murder, and faces a possible full life sentence when he is sentenced by Lord Justice Fulford on Thursday.

Couzens sat in the dock with his head bowed on Wednesday as prosecutor Tom Little QC opened the case in front of a packed courtroom, including Everard’s family.

Little said Couzens would have known what language to use to those who may have breached the CCP (Chinese Communist Party) virus restrictions since he had worked on uniformed COVID-19 patrols in late January to enforce the emergency regulations.

“The fact she had been to a friend’s house for dinner at the height of the early 2021 lockdown made her more vulnerable to and more likely to submit to an accusation that she had acted in breach of the COVID regulations in some way,” Little told the court.

CCTV footage played in court shows Couzens raising his left arm, holding a warrant card, before handcuffing Everard and putting her into the back of the car.

Little said a couple passing by in a car said they saw a woman appearing to have her left arm behind her back and was in the process of “giving her other arm behind her back” as a man in dark clothing handcuffed her, thinking the woman “must have done something wrong” and was being arrested by an undercover officer.

“They were in fact witnessing the kidnapping of Sarah Everard. She was detained by fraud,” the prosecutor said.

The court heard that Everard was handcuffed at about 9:34 p.m., detained in Couzens’ hire car by 9:37 p.m., and Couzens started driving to Kent a minute later.

The hired vehicle was caught on CCTV in Dover, Kent, after 11:30 p.m. as Couzens transferred his victim to his own car.

Couzens then drove to a remote rural area north-west of Dover which he knew well where he parked up and raped Everard and strangled her with his police belt.

The court heard that Couzens bought a hot chocolate and tart at 8:15 a.m. on March 4, before returning the hired vehicle. He ditched Everard’s phone into a channel in the town of Sandwich before bringing petrol to burn the body a day later.

Couzens burnt Everard’s body, clothing, and possessions inside a refrigerator, and moved her remains to a pond, where she was found later.

On March 7, amid extensive publicity about Everard’s disappearance, he took his family on a day out to the woods, allowing his two children to play close by.

In an emergency police interview, Couzens falsely claimed he had been forced to pick up a woman and hand her over to a gang after getting into “financial [expletive].”

On March 13, when gatherings were still prohibited under the CCP virus regulations, the Met clashed with mourners and protesters at a public vigil for Everard, sparking days of protests across a number of cities.

The Met issued a statement on Wednesday ahead of the court hearing, saying officers are “sickened, angered, and devastated” by Couzens’s crimes “which betray everything [they] stand for.”

“Our thoughts are with Sarah’s family and her many friends. It is not possible for us to imagine what they are going through,” the statement reads.

“We recognise his actions raise many questions and concerns but we will not be commenting further until the hearing is complete.”