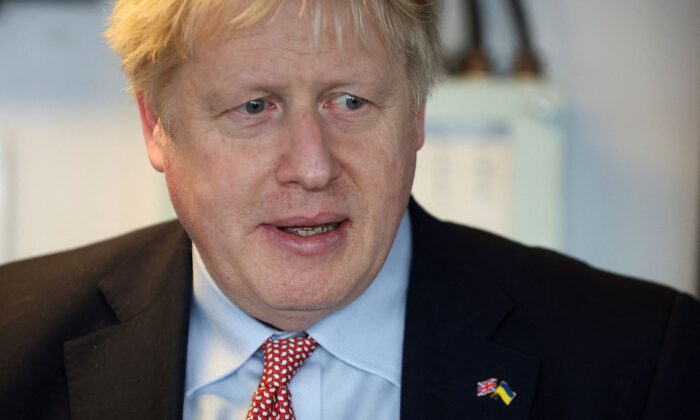 In a call with Ukrainian President Volodymyr Zelensky on Sunday, Johnson said the UK would “continue to stand behind Ukraine in all their efforts to bring an end to this disastrous conflict.”

According to Downing Street, the prime minister commended Zelensky and the Ukrainian people on their “fortitude,” adding that Russian President Vladimir Putin’s “barbaric actions” were “testing not just Ukraine but all of humanity.”

“He said the UK would continue to pursue more options for bolstering Ukraine’s self-defence, working with partners including at Tuesday’s meeting of the Joint Expeditionary Force (JEF) in London.”

Johnson is hosting leaders from the JEF, an alliance of northern European nations including Denmark, Finland, Estonia, Iceland, Latvia, Lithuania, the Netherlands, Sweden, and Norway, on Monday and Tuesday.

She wrote on Twitter that the UK is “doing all we can to support including defensive weapons and humanitarian aid.”

Earlier on Sunday, 35 people were killed in a Russian missile attack on a military training base in western Ukraine, less than 15 miles from the border with Poland, a NATO member state.

The attack on the Yavoriv base, which has previously been used by NATO to train Ukrainian soldiers, was one of the western-most targets struck by Russia during the invasion.

Ukraine President Volodymyr Zelensky warned it was “only a matter of time” before NATO gets struck by Russian fire.

Talking to the BBC on Monday, UK Health Secretary Sajid Javid said he believed a direct Russian attack on a NATO member was still “very unlikely,” but it is “not impossible.”

He warned that such an attack would trigger a response from the alliance, which has a policy of mutual defence.

He said: “We’ve made it very clear to the Russians even before the start of this conflict. Even if a single Russian toecap steps into NATO territory, then it will be considered an act of war.”

Downing Street said the strike so close to a NATO member is “deeply concerning” and that the UK is seeking to build the “broadest possible coalition” against the Russian aggression.

“These strikes are deeply concerning,” the prime minister’s official spokesman said. “We want everyone in the international community to condemn Putin’s barbaric acts.”