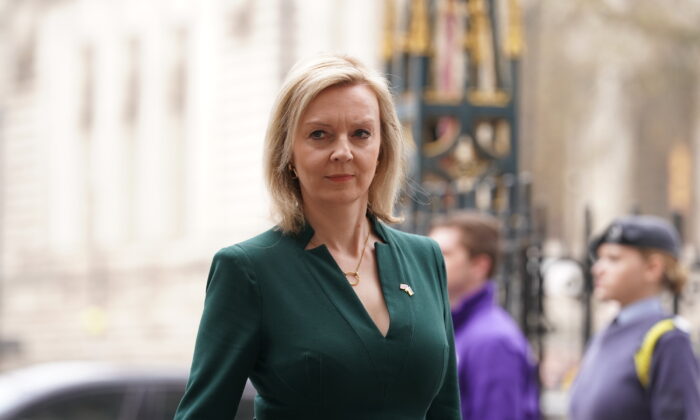 UK ‘Will Not Shy Away’ From Taking Action on Northern Ireland Protocol: Foreign Secretary

The UK’s Foreign Secretary Liz Truss said the UK “will not shy away from taking action” if it can agree with the European Union on the Northern Ireland Protocol.

It comes after Downing Street said Prime Minister Boris Johnson had “made clear” to his Irish counterpart Taoiseach Micheál Martin that the situation in Northern Ireland was “now very serious.”

The region has not had a functioning government since Feb. 3 when unionist former First Minister Paul Givan resigned in protest of the protocol—part of the UK’s Brexit deal that leaves Northern Ireland in the EU’s single market and customs union, effectively creating a sea border for goods and services between the region and the rest of the UK.

The dispute is still preventing the formation of a new executive following an election on May 5, as the Democratic Unionist Party (DUP) continues to refuse to participate.

In a statement on Tuesday, the Foreign Office said under E.U. proposals suggested in October, trading arrangements could worsen and everyday items could disappear from shop shelves in Northern Ireland.

“The current E.U. proposals fail to properly address the real issues affecting Northern Ireland and in some cases would take us backward,” Truss said.

“Prices have risen, trade is being badly disrupted, and the people of Northern Ireland are subject to different laws and taxes than those over the Irish Sea, which has left them without an executive and poses a threat to peace and stability.”

The foreign secretary said the solution “cannot be more checks, paperwork, and disruption,” before suggesting she’s prepared to override the protocol if an agreement can’t be reached.

“Our preference has always been for a negotiated solution but [we] will not shy away from taking action to stabilise the situation in Northern Ireland if solutions cannot be found,” she said.

Truss is due to meet Maroš Šefčovič, the vice president of the European Commission, on Thursday to resume talks around the Protocol.

Speaking to BBC Breakfast on Wednesday, levelling up minister Michael Gove rejected that the UK government will “tear up” the Brexit agreement, but said, “no option is off the table.”

Under the 1998 Good Friday Agreement, which is instrumental in ending decades of sectarian violence between Irish nationalists and unionists, the two sides must share powers in the Northern Ireland Executive.

But the prime minister’s predecessor Theresa May on Tuesday cautioned Johnson against unilaterally altering the terms of the Protocol, saying she doesn’t believe it’s the right move.

“I think the government needs to consider not just some immediate issues, but also the wider sense of what such a move would say about the UK and its willingness to abide by treaties which it has signed,” May argued.

Responding to DUP leader Sir Jeffrey Donaldson’s argument that the protocol “threatens the Good Friday Agreement it has to be dealt with,” May said the DUP had rejected her earlier versions of the Brexit deal, which she said would have prevented a border “down the Irish Sea or … between Northern Ireland and the Republic of Ireland.”

The EU’s Šefčovič rejected that the protocol can be renegotiated.

“The protocol, as a cornerstone of the Withdrawal Agreement, is an international agreement,” he said in a statement on Tuesday.

“Its renegotiation is not an option. The European Union is united in this position,” he said.

Sinn Féin vice president Michelle O’Neill, who would have become the first nationalist First Minister of Northern Ireland after her party’s historical win in the elections last week, on Tuesday said that the protocol is “here to stay” and called on the DUP to join an executive at Stormont.