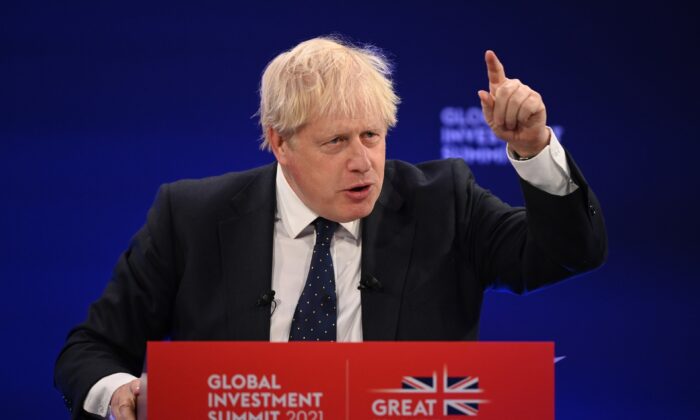 UK Will Not ‘Pitchfork Away’ Chinese Investment: Boris Johnson

British Prime Minister Boris Johnson said he will not “pitchfork away” investment from China despite a long list of ongoing rows with the communist regime over issues such as Hong Kong, the Uyghur persecution, and the South China Sea.

“I’m not going to tell you the UK government is going to pitchfork away every overture from China,” Johnson said in an interview with Bloomberg ahead of the Global Investment Summit in London. “China is a gigantic part of our economic life and will be for a long time—for our lifetime.”

But he said that does not mean that Britain should be “naive” about the Chinese regime’s involvement in the UK’s critical natural infrastructure” such as nuclear power and 5G technology.

Johnson said Britain “should be cautious” about how it handles its critical infrastructure and foreign direct investment from China, and “that is why we have brought in some of the legislation that we have.”

“I am no Sinophobe, very far from it,” he said, adding, “China is a great country, a great civilisation.”

UK–China relations are at the lowest point in years due to disputes over a long list of issues, most prominently the regime’s violation of the Sino–British Joint Declaration on Hong Kong and its alleged genocidal policies in Xinjiang.

In response to these abuses, the UK government has imposed sanctions on Chinese officials responsible for the persecution of Uyghurs in Xinjiang, and has offered Hong Kong residents with British National (Overseas) status a pathway to British citizenship.

Last month, the UK further irked Beijing by joining AUKUS, a new trilateral security partnership with the United States and Australia for the Indo–Pacific region.

But Johnson has been eager to maintain positive economic relations with Beijing. In January 2020, he offered Chinese telecom giant Huawei a limited role in the “non-sensitive” parts of the UK’s 5G networks, a decision that was reversed in July 2020 under intense pressure from the Trump administration.

According to Australian scholar Clive Hamilton, Britain and Germany are most severely affected by CCP infiltration “because of their role in the world and because of the naivety of the top elites in those countries” in politics, business, academia, culture, and media.

Hamilton, coauthor of “Hidden Hand: Exposing How the Chinese Communist Party Is Reshaping the World,” told The Epoch Times last September that there had been “an awakening within the British Parliament” in regard to the threat posed by the Chinese regime.

But he warned that it was “far too early to start celebrating.”

Sharon Hsu and PA contributed to this report.