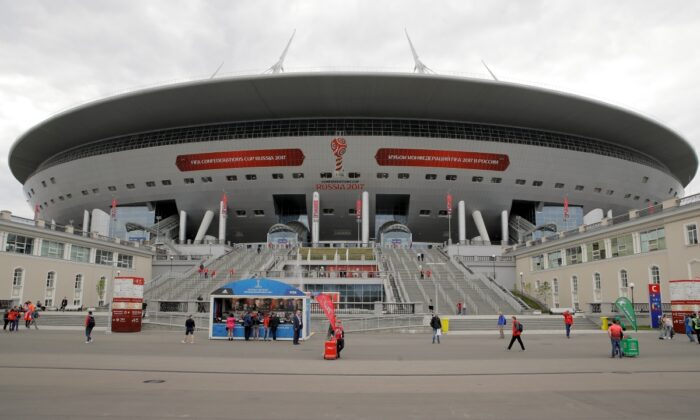 A general view of the St. Petersburg Stadium prior to the Confederations Cup soccer match between New Zealand and Portugal, in St. Petersburg, Russia, on June 24, 2017. (Pavel Golovkin/AP Photo)
Soccer

LONDON—UEFA faced calls from the British government to strip Russia of hosting the Champions League final over concerns it would legitimize what it called an “illegal invasion” of Ukraine, prompting European football’s governing body to say Tuesday it would reconsider St. Petersburg staging the showpiece match.

The biggest game in the European season is scheduled May 28 at the Gazprom Arena, which is named after the state-owned energy giant that has sponsored the men’s competition for a decade.

Gazprom is also embedded in the decision-making at UEFA, with Alexander Dyukov, the chief executive of an oil subsidiary company, sitting on UEFA’s ruling executive committee.

UEFA has acknowledged for the first time a risk to Russia staging the final following talks among the senior leadership about the crisis.

“UEFA is constantly and closely monitoring the situation,” the Champions League organizer said in a statement, “and any decision would be made in due course if necessary.”

British Prime Minister Boris Johnson highlighted concerns about Russia using sports to enhance its status while urging President Vladimir Putin not to carry out a full invasion of Ukraine after massing an estimated 150,000 troops on three sides of neighboring Ukraine.

“He is going to end up with … a Russia that is more isolated, a Russia that has pariah status, no chance of holding football tournaments in a Russia that invades sovereign countries,” Johnson told the House of Commons.

Russia sparked an outcry by announcing on Monday that its recognition of independence for areas in eastern Ukraine extended to territory currently held by Ukrainian forces and troops were then authorized to be sent to the separatist regions.

“It’s a very delicate situation that can change hourly and of course we all have an eye on it,” Rainer Koch, a German member of the UEFA executive committee, told the broadcaster ARD.

With four representatives in the round of 16 of the Champions League, England has the most teams remaining in the competition.

Oleksandr Zinchenko, a Ukrainian who plays for Manchester City, issued a plea on Instagram for his country’s territorial sovereignty to be protected.

As United States forward Christian Pulisic celebrated scoring for Chelsea against Lille in a last-16 game on Tuesday, Gazprom advertisements flashed on the electronic boards at Stamford Bridge. Chelsea is owned by Russian oligarch Roman Abramovich, whom Johnson wrongly stated in the House of Commons was facing sanctions from the government.

Culture Secretary Nadine Dorries, who holds the sports brief in Johnson’s cabinet, said she would discuss “serious concerns” about Russia staging the final with UEFA.

“We won’t allow President Putin to exploit events on the world stage to legitimize his illegal invasion of Ukraine,” Dorries said.

UEFA has had to move the Champions League final in the last two seasons, both times from Turkey to Portugal due to the pandemic.

FIFA council member Alexey Sorokin, who also leads the organizing committee for the final, said no discussions with UEFA had taken place about St. Petersburg losing the hosting rights.

“We are preparing for the final according to plan,” Sorokin told the TASS news agency. “We expect more than 50,000 foreign fans to arrive.”

But members of Russia’s upper house voted unanimously on Tuesday to allow Putin to use military force outside the country—effectively formalizing a Russian military deployment to the rebel regions, where an eight-year conflict has killed nearly 14,000 people.

UEFA has been keeping Ukrainian and Russian teams separated in draws to prevent them from playing each other since Moscow annexed the Crimea peninsula of Ukraine and backed separatist insurgents in eastern Ukraine.

Russia’s state gas company, Gazprom, has been a sponsor of the Champions League since 2012—the same year Ukraine co-hosted the European Championship with Poland. But the company’s logos were removed from a UEFA-branded “Champions Festival” on Kyiv’s main street when the Ukrainian capital staged the 2018 Champions League final between Real Madrid and Liverpool.

Russia is already serving a punishment from the World Anti-Doping Agency for state-sponsored cheating that prevents it from hosting international sports events through December. But UEFA was not bound by the ruling as a European governing body which meant St. Petersburg has already hosted four games at the European Championship last year.

Separately on Tuesday, the Polish football federation asked FIFA to urgently clarify whether its World Cup playoff game against Russia on March 24 will be played in Moscow as scheduled. The winner of that game will face Sweden or the Czech Republic for a place at the World Cup in Qatar.

If Russia qualifies for the World Cup in Qatar in November the team name must be changed to something neutral that likely would not include the word “Russia.” The Russian team at the past two Olympics has been called ROC—Russian Olympic Committee.