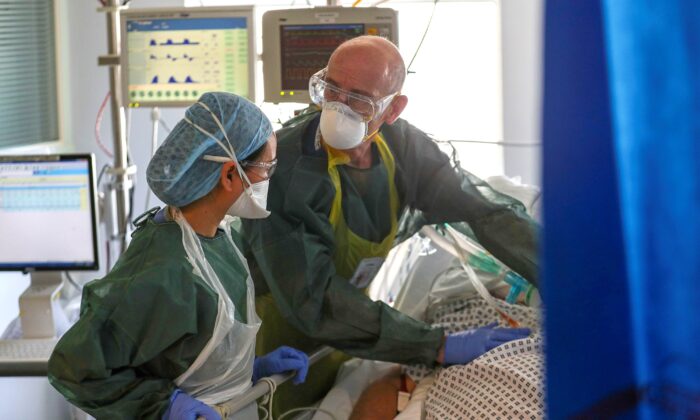 UK Vaccine Mandate May Force 123,000 out of Health Care Sector

The UK’s COVID-19 vaccine mandate for front-line health and social care staff in England may force more than 120,000 people to leave the sector, according to government estimates.

Health Secretary Sajid Javid announced on Tuesday that all those working in the National Health Service (NHS) and social care must get fully vaccinated to continue in their jobs from April 1, 2022.

The Department of Health and Social Care (DHSC) said the mandate will apply to health and social care workers who have “direct, face-to-face contact” with patients—such as doctors, nurses, dentists, and domiciliary care workers, unless they are exempt.

The rule will also apply to porters or receptionists who may have social contact with patients.

The policy is intended to “avoid preventable harm and protect patients in the NHS, protect colleagues in the NHS, and of course protect the NHS itself,” Javid told the House of Commons on Tuesday.

In an impact assessment (pdf), also published on Tuesday, the government estimated that around 54,000 medical and social care staff will take up the offer of a jab as a result of the vaccine mandate.

But it admitted that the policy could have a “significant impact” on the health and care workforce and could result in as many as 123,000 staff members leaving their jobs.

The government’s impact statement estimates that by the end of the grace period around 88,000 health workers, including 73,000 NHS staff, and 35,000 social care workers will remain unvaccinated.

The statement warned that “any reduction in the numbers of health and social care staff may lead to reduced or delayed services” at a time when the UK health system is “stretched with an elective waiting list of 5.72 million and high levels of vacancies.”

The impact report also estimates that the “cost of replacing unvaccinated workers is £270 million ($365 million).”

The main opposition Labour party said it wants to see NHS staff vaccinated but advised the government to “proceed with caution” given possible staff shortages.

Shadow health secretary Jon Ashworth said on Tuesday that NHS trusts are concerned that the policy “could exacerbate some of these chronic understaffing problems,” adding “we simply cannot afford to lose thousands of NHS staff overnight.”

Also on Tuesday, officials in Northern Ireland announced that plans for a public consultation on mandatory COVID-19 and flu vaccination for new recruits to the health and social care workforce in the province.

But the Welsh and Scottish governments are not planning to introduce mandated vaccines for health and social care staff.