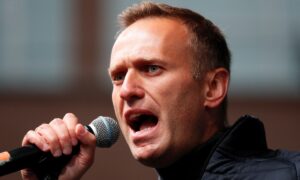 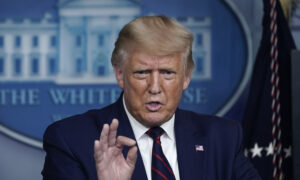 Trump Says He Has Not Seen Proof of Navalny Poisoning, Awaits Results From Germany
0 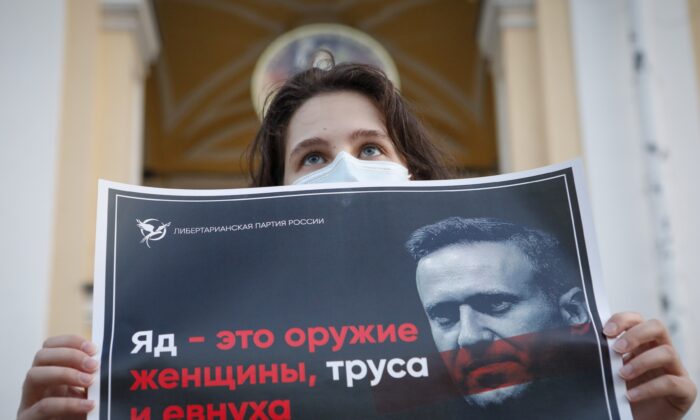 A protester stands holds a poster reads "poison is the weapon of a woman, a coward and a eunuch!" during a picket in support of Russian opposition leader Alexei Navalny in the center of St. Petersburg, Russia, on Aug. 20, 2020. (Elena Ignatyeva/AP Photo)
Europe

The UK on Monday urged Moscow to provide answers about the poisoning of Russian opposition figure Alexei Navalny, calling it an “attack” on international rules, and said that the UK will work to hold the perpetrators accountable.

Britain’s Foreign Office on Monday summoned the Russian ambassador to express the UK’s “deep concern” over the use of a chemical nerve agent in the poisoning of Navalny, a leading opponent of President Vladimir Putin.

“The Foreign Secretary has made it clear that it is absolutely unacceptable that a banned chemical weapon has been used, and that violence has again been directed against a leading Russian opposition figure,” a Foreign Office spokesperson said in a statement.

“There is a case here for Russia to answer,” the spokesperson added.

“They have international obligations to uphold. This is nothing short of an attack against the rules based international system which keeps our societies safe.”

The spokesperson said Russia should “conduct a full, transparent criminal investigation” into the case.

“We will work with our partners, including through action in the OPCW [Organization for the Prohibition of Chemical Weapons], to hold the perpetrators to account,” the spokesperson said.

Johnson on the same day spoke to Macron on the phone.

They “expressed their outrage at the attack on Alexey Navalny and reiterated that Russia must urgently explain how the opposition leader was poisoned with Novichok,” the prime minister’s office said in a statement.

Germany’s Foreign Minister Heiko Maas on Sunday said if Russia wouldn’t help in investigating the poisoning incident, Germany will consult with its partners regarding a response, including possible sanctions against Russia.

Navalny, a Kremlin critic and corruption investigator, fell ill on a flight to Moscow last month and was taken to a hospital in the Siberian city of Omsk.

He was flown to Charite hospital in Berlin for treatment on Aug. 22 and placed into an induced coma before coming out of it on Monday.

German authorities have said that tests showed that he had been poisoned with a chemical nerve agent from the Novichok group. British authorities previously identified the nerve agent, developed during the Soviet era, as the poison used on former Russian spy Sergei Skripal and his daughter in England in 2018.

President Vladimir Putin’s spokesman has brushed off allegations that the Kremlin was involved in poisoning Navalny and said last week that Germany hadn’t provided Moscow with any evidence about the politician’s condition.

U.S. President Donald Trump said on Saturday that he wanted to wait until he sees the evidence, which he was expecting to receive soon, before criticizing the Kremlin for its role in the case.

The Associated Press and Tom Ozimek contributed to this report