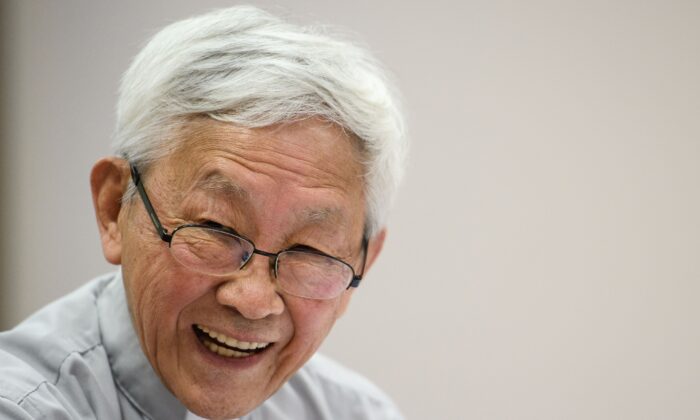 Cardinal Joseph Zen, former bishop of Hong Kong, speaks during a press conference at the Salesian House of Studies in Hong Kong on Sept. 26, 2018. (Anthony Wallace/AFP via Getty Images)
UK

Hong Kong police arrested Zen, who was the former head of the Catholic Church in Hong Kong, as well as singer and activist Denise Ho, academic Hui Po-keung, attorney Margaret Ng, and former lawmaker Cyd Ho on May 11 for allegedly contravening the “collusion with foreign forces” provision of the city’s national security law.

Asking an “urgent question” over the arrests in the House of Commons on May 12, Sir Iain Duncan Smith, a former leader of the Conservative Party, described the arrests as a “huge abuse of human rights” and urged the UK government to respond with new measures.

He said the UK “lags behind others,” as it hasn’t imposed Magnitsky sanctions on individuals responsible for the abuses in Hong Kong, such as new Hong Kong new leader John Lee and his predecessor Carrie Lam, who have already been sanctioned by the United States.

Duncan Smith also expressed concerns over reports that the UK government “may well reenact discussions about the Joint Economic Trade Commission, and even re-endorse the economic and financial dialogue, which was previously suspended.”

The veteran MP told the Commons: “I want from the government an absolute undertaking that they will sanction those individuals and there’s no way on earth we’re going to entertain any discussions in opening up trade discussions or financial discussions with this abusive government.”

Foreign Office minister James Cleverly said the latest arrests were “unacceptable” and reiterated that the UK considers the Chinese regime to be “in a state of ongoing non-compliance with the Sino–British joint declaration.”

“That will be borne in mind when we speak, or think, about any other agreements that might be entered into with that government,” Cleverly said.

Raising reports of Hong Kongers who have fled to the UK being followed and even attacked, Labour MP Sarah Owen asked how the government would ensure that Hong Kongers are protected from Chinese Communist Party agents on UK soil.

“The offer that we made to British Nationals Overseas in Hong Kong to come here and make their lives here was designed specifically to help protect them from persecution and danger,” Cleverly said. “We absolutely see that that duty does not stop just because they are now here in the UK.

“I can assure her that we take their protection incredibly seriously, particularly in light of some of the things that we are seeing.”

Gary Bai and PA Media contributed to this report.