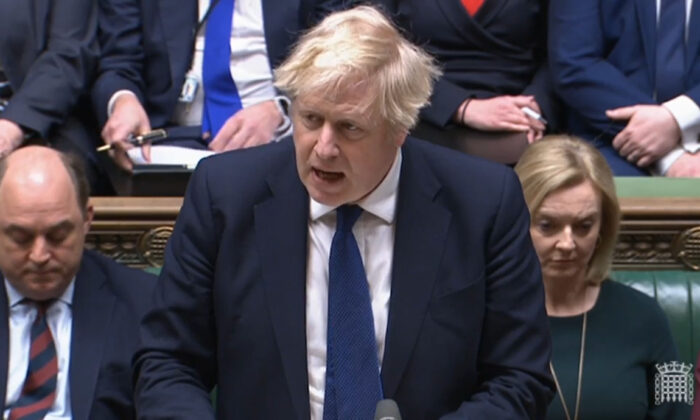 Prime Minister Boris Johnson addresses MPs on the latest situation regarding Ukraine, in the House of Commons, central London, on Feb. 24, 2022. (PA)
UK

UK Unveils ‘Most Severe’ Sanctions Against Russia Over Ukraine Invasion

The British government has announced another package of sanctions on Russia in response to the invasion of Ukraine, which Prime Minister Boris Johnson said is the “most severe” Russia has ever seen.

Following Russian President Vladimir Putin’s announcement of a “special military operation” in Ukraine in the early hours of Thursday, explosions have been reported across the country, including in the capital Kyiv, as well as in other cities, including Kharkiv, Mariupol, and Odessa.

Addressing the House of Commons on Thursday, Johnson said Putin will “stand condemned in the eyes of the world and of history,” and will “never be able to cleanse the blood of Ukraine from his hands.”

“Now we see him for what he is—a bloodstained aggressor who believes in imperial conquest,” he said, adding that “this hideous and barbarous venture of Vladimir Putin must end in failure.”

Johnson said the UK is launching “the largest and most severe package of economic sanctions that Russia has ever seen.”

He said the government will sanction “all the major manufacturers that support Putin’s war machine,” will imminently ban Russia’s national airline Aeroflot from touching down planes in the UK, and will freeze the assets of all major Russian banks, including immediately against state-owned VTB, Russia’s second-biggest bank.

Updating Parliament on his talks with G7 leaders and NATO secretary-general Jens Stoltenberg, Johnson said the G7 agreed to work in unity to “maximise the economic price that Putin will pay for his aggression.”

He said this must include “ending Europe’s collective dependence on Russian oil and gas that has served to empower Putin for too long.”

He also said, “countries that together comprise about half the world economy are now engaged in maximising economic pressure on one that makes up a mere 2 percent.”

The prime minister said the UK will coordinate with the United States and the EU to introduce “new trade restrictions and stringent export controls.”

“These trade sanctions will constrain Russia’s military, industrial, and technological capabilities for years to come,” he said.

“We will continue on a remorseless mission to squeeze Russia from the global economy piece by piece, day by day, and week by week,” he added.

Sanctions will also be applied to Belarus, which has supported the Russian military action against Ukraine.