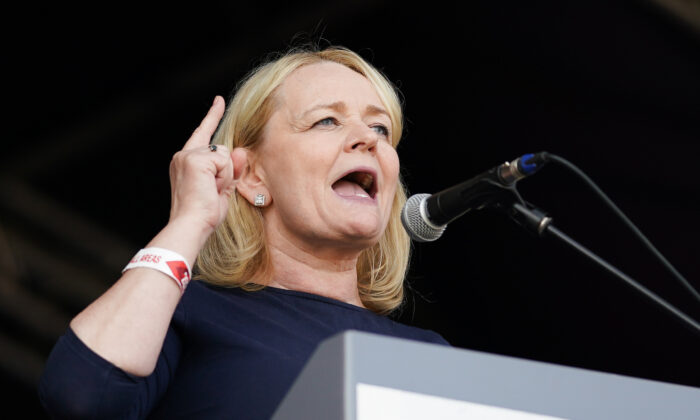 The leader of the UK’s biggest private sector union has warned of a “summer of discontent” as pay disputes are expected to increase amidst soaring inflation.

Sharon Graham, general secretary of the Unite union, told the BBC that there could be hundreds of disputes involving tens of thousands of people if workers are made to “pay the price for inflation.”

She said ordinary workers have already “had a spring, summer, autumn, and winter of discontent for years,” and “any employer who can pay, who has made profit out of workers, has to pay a proper fair wage to those workers.”

The UK’s inflation rate is currently over 9 percent and is expected to rise further. But Treasury minister Simon Clarke and Bank of England Governor Andrew Bailey have both warned employees not to expect their wages to rise along with inflation, saying wage rises would worsen inflation.

But Graham said that employers “slashing the pay” of those who worked through the CCP (Chinese Communist Party) virus pandemic is “abhorrent.”

The union boss denied that there is a risk of a “1970s-style” spiral of wages and prices. Instead, she blamed a rise in profits at big companies.

But the Confederation of British Industry (CBI) rejected the attack on businesses.

A CBI spokesperson said: “With living costs at the highest level in decades, workers are understandably concerned about how they’re going to cope with rising prices. Businesses too are being hit by soaring input costs.

“Wherever they can, firms are stepping-up to help by absorbing costs to keep prices down for consumers, as well as supporting their employees to cope with the cost-of-living spike.”

Meanwhile, train drivers at eight rail companies have decided to stage a 24-hour strike later this month over a pay dispute.

On June 23, the government announced a new piece of legislation enabling businesses to supply agency workers to plug staffing gaps during industrial action.

Business Secretary Kwasi Kwarteng said it is “not sustainable” for trade unions to be able to hold the country “to ransom by grinding crucial public services and businesses to a halt.”