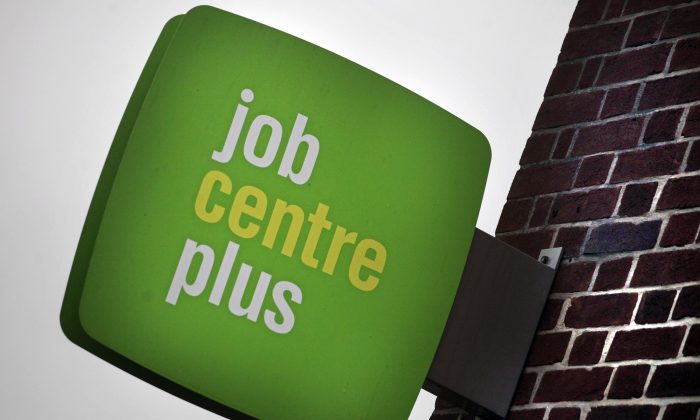 The Job Centre Plus logo is seen displayed outside the employment office in Trowbridge, England. (Matt Cardy/Getty Images)
Special

UK unemployment rate rises to 7.9 percent, with 70,000 more unemployed over that last quarter.

The number of people classified as unemployed in the UK rose by 70,000 in the latest quarter, according to the Office of National Statistics.

But the government’s analysis of the data said it meant employment had been “broadly flat over the quarter.”

“The number of people classed as unemployed increased by 70,000, but most of this is accounted for by a 57,000 fall in inactivity–those people who are neither in work nor looking for work. Unemployment is still 71,000 lower than it was a year ago,” reads a statement on the Department of Work and Pensions website.

“The number of unemployed people rose by 70,000 between September–November 2012 and December–February 2013 and overall there were 2.56 million people who were looking and available to work but unable to find a job,” reported ONS. “However, there were 71,000 fewer unemployed people compared with a year earlier. The percentage of the labour force aged 16 and over who were unemployed stood at 7.9 percent. Putting the unemployment rate into historical context, it is 4 percentage points below the peak of 11.9 percent seen in the mid 1980s.”

Alan Clarke, economist at Scotiabank, told the BBC: “It’s not a disaster, but a lot of the froth and really good news we had over the last year on jobs is becoming exhausted, which shouldn’t be a surprise when there is not much growth around.”

Minister for Employment Mark Hoban said in  statement on the DWP website: “Today’s figures show a further fall in the number of people claiming Jobseeker’s Allowance, including a welcome drop amongst young people. But there are still tough challenges ahead. We will continue to give jobseekers all the help and support they need to realise their aspirations.”

Howard Archer, chief UK economist at IHS Global Insight, told the Guardian newspaper: “Overall, the data fuels concern that the labour market’s recent strength is fraying as the economy continues to struggle for even modest sustained growth. Meanwhile, earnings growth remained very weak in February. While weak earnings growth is clearly helping to keep unemployment down, the flip-side of this is that it continues to limit consumers’ purchasing power.”