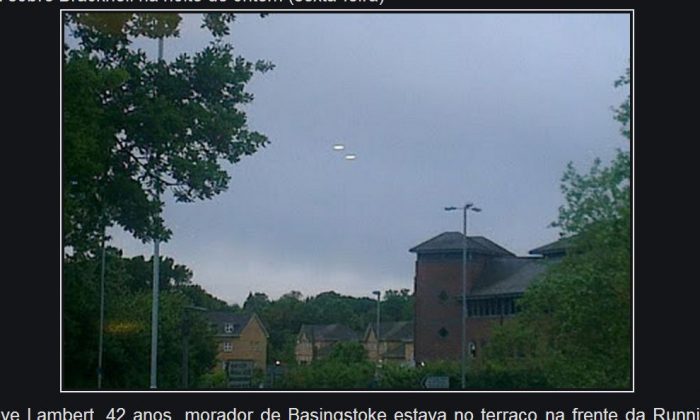 A screenshot of the Ufosfacts.blogspot.in website shows the purported UFO.
Beyond Science

A U.K. man took photographs of an apparent UFO—appearing as two lights in the sky—in the city of Bracknell last Friday, it was reported.

Steve Lambert, who was on the terrace of a local pub, spotted two lights in the sky in the evening.

“They were heading south-west at speed towards Basingstoke—quicker than any normal aircraft. They were there for less than five seconds,” he told GetReading.com. He originally posted the photo on Facebook.

“I have seen a lot of funny things in the sky and I have always practiced trying to take a photo quickly on my mobile phone,” Lambert added.

He added: “I am interested to see if anyone knows what it is. If someone else saw a funny light or pair of lights then we know there is something out there. I really want to know what is going on out there – there probably is life out there.”

Last week, a Dutch woman photographed an apparent UFO over Muiderslot Castle outside of Amsterdam, generating online interest.  “It was kind of creepy,” Corinne Federer, the photographer, told the Huffington Post. She described the UFO as having “S-shaped” fins.

And weeks ago, a video showed a UFO entering a smoking volcano south of Mexico City.