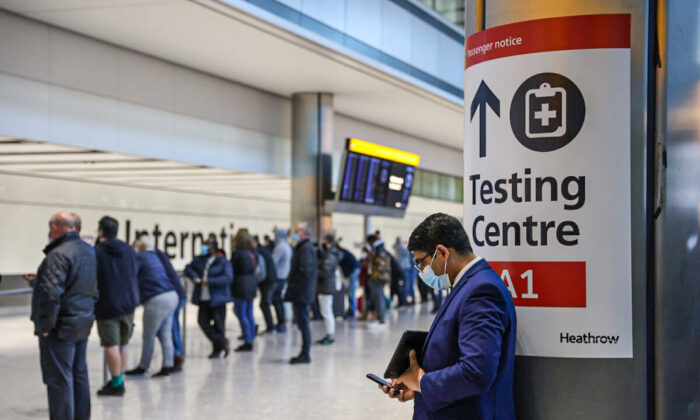 The British travel industry has reacted with fury to the latest travel restrictions announced by the UK government to rein in the new Omicron COVID-19 variant.

UK Health Secretary Sajid Javid said on Saturday that all travellers arriving in England will be required to take a COVID-19 pre-departure test from Tuesday.

He also said that Nigeria has been added to the government’s travel “red list,” meaning only UK and Irish citizens and residents travelling to the UK from Nigeria will be allowed to enter from 4 a.m. on Monday.

The Scottish and Welsh governments said they were both adopting similar controls.

“Pre-departure tests act as a major deterrent to travel and most of the limited remaining demand following the reintroduction of self-isolation will now fall away, just as airports were hoping for a small uplift over the Christmas holiday,” she said.

Dee said the UK government and the local administrations of Scotland and Wales should have announced support for the sector alongside the restrictions so it could “get through another period of shutdown.”

“It is premature to hit millions of passengers and industry before we see the full data,” he said. “We know from experience that blanket restrictions do not stop the importation of variants.”

He also said the government’s rapid change in entry requirements has made it hard for the travel industry to plan ahead. “They’ve now changed their travel advice twice within a week, and it’s just impossible for anyone to plan.”

Transport Secretary Grant Shapps said he understands these concerns. “We appreciate this will be difficult for the travel sector as we prioritise public health & protect the progress of our world-leading vax & booster programme,” he wrote on Twitter on Saturday.

Deputy Prime Minister Dominic Raab also said he knew it is “a burden for the travel industry.”

But he said, “We have got to take the measures targeted forensically to stop the new variant seeding in this country to create a bigger problem.”

“We have taken a balanced approach but we are always alert to extra risk that takes us back not forward,” he told Sky News on Sunday.

The main opposition Labour Party, which had been pressing for the return of pre-departure tests since the Omicron variant was first identified in South Africa, welcomed the government’s move, but criticised it for not acting sooner.