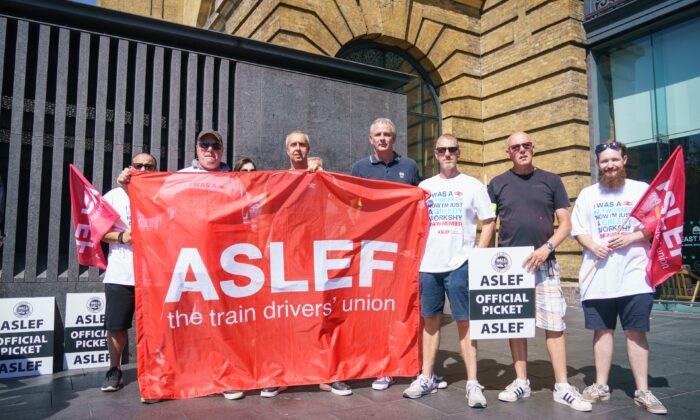 Rail drivers union Aslef has agreed to hold formal talks with employers next week as drivers from nine train operators are staging a 24-hour strike on Saturday over ongoing disputes over pay, jobs, and conditions.

Aslef members from nine train companies walked out on Saturday, crippling large parts of the network, with some parts of the country having no services. It’s the fourth and the largest strike Aslef members have staged since last month.

Aslef General Secretary Mick Whelan said ahead of the strike that companies failed to offer a pay increase because their hands are tied by the government.

The employers “blame the government—a result, they say, of the dodgy deals they did when the franchises were turned into management contracts—while the government says it’s down to the TOCs [train operating companies]. So we are caught in a Catch-22 situation where each side blames the other,” Whelan said in a statement.

Whelan said the drivers had not had a pay increase since April 2019, which is a “real terms pay cut” with inflation running at “9 percent, 10 percent, or even 11 percent.

Rail Delivery Group chairman Steve Montgomery told BBC Radio 4’s “Today” programme on Saturday that a “large number” of services would be disrupted, but “the good news is that we had informal talks with Aslef and there will be formal talks next week.”

“It is important we get round the table and we start to have meaningful discussions about how we can look at reform so that we can then offer our staff a pay increase. It is really important we take this opportunity and try and hopefully prevent further strikes and get some result to this situation,” he said.

Speaking to the same programme, Whelan confirmed the talks would take place but said the rail companies were prevented from offering an increase of more than 2 percent without permission from the government.

Next week, members of three unions involving tens of thousands of rail, tube, and bus workers are set to walk out in a three-day period.

More than 40,000 RMT members at 14 train operators are striking on Aug. 18 and Aug. 20, while its members at London Underground and Overground will walk out on Aug. 19.

TSSA members are set to strike on all three days, and more than 1,600 London bus drivers, who are members of Unite, will take action on Aug. 19 and Aug. 20.