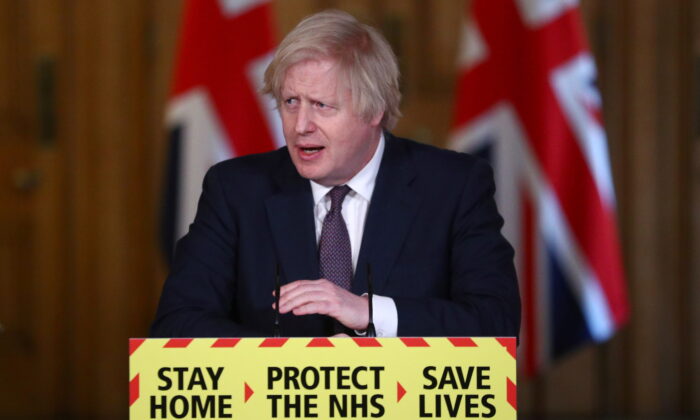 Emergency CCP virus powers allowing the UK government to shut down swathes of England’s economy are set to be repealed, the government said on Sept. 12.

The announcement comes as the controversial plan to introduce domestic vaccine passports in England was dropped on the same day.

In a statement published on Sept. 12, the government said Prime Minister Boris Johnson is expected to repeal in the near future some of the emergency powers enacted in England by the Coronavirus Act 2020.

The powers that are “no longer necessary” include powers to close down sectors of the economy, apply restrictions on events and gatherings, disrupt education and child care, extend time limits for urgent warrants, or detain infectious people.

Some of the powers are expected to remain, including the powers to give sick pay to those who are isolating from day one rather than day seven; to direct schools to remain open if they close against government guidance; to help the National Health Service (NHS) to get the emergency resources it needs; “to protect the most vulnerable from infection;” and “to control the spread of variants.” The legal requirement for someone to isolate if they test positive will also remain, according to the statement.

Since March 2020, England has undergone three national lockdowns and a wave of “tiered” regional lockdowns, resulting in numerous job losses and the permanent shutdown of many businesses. Schools were shut for months on end, with exams cancelled for two consecutive years. For months, attending events and protests was also outlawed, as was meeting with friends and family.

“But I’m determined to get … rid of any powers we no longer need because of our vaccine defences,” the statement reads.

The prime minister attributed the progress to “the efforts of the public, the NHS, and our phenomenal vaccination programme.”

Alistair Carmichael, the Liberal Democrat Party’s home affairs spokesperson, said the government should repeal the Coronavirus Act in its entirety.

Responding to Health Secretary Sajid Javid’s announcement that the government has dropped its plan to introduce vaccine passports in nightclubs and large events, Carmichael said it was “a victory for the Liberal Democrats and all those campaigners who stood up for our civil liberties against these deeply illiberal and unworkable plans.”

“After this inevitable U-turn, the Conservatives must now see sense and scrap the unnecessary and draconian Coronavirus Act altogether,” he said.

The expected repealing of powers is part of Johnson’s autumn and winter plan for managing the CCP virus pandemic. The CCP virus is the pathogen that causes COVID-19.

The plan will rely on the COVID-19 vaccines as the “first line of defence,” with other measures including new treatments, testing, and the UK’s world-leading variant surveillance system, the government said.

Studies suggest that while vaccines don’t stop the spread of the CCP virus, they’re effective in preventing severe illness from its existing variants. Long-term safety data for the vaccines won’t be available until sometime later, but according to available data, health authorities around the world have deemed that their potential benefits outweigh the potential risks associated with their use.

As of Sept. 9, nearly 90 percent of the UK population over 16 have received the first dose of a CCP virus vaccine, and more than 80 percent have received both doses, the government said.

Those who are immunocompromised will be offered a third dose of a COVID-19 vaccine as a primary dose.

The Joint Committee on Vaccination and Immunisation (JCVI) is expected to give its final recommendation on a booster vaccination programme soon.

Professor Sir Andrew Pollard, director of the Oxford Vaccine Group, said on Sept. 10 that the UK should donate vaccines to other countries instead of using them on a booster programme.

AstraZeneca CEO Pascal Soriot has also said there hasn’t been enough clinical data to suggest whether booster shots are necessary.

The JCVI declined to recommend mass vaccination of  12- to 15-year-olds on health grounds on Sept. 3, but the UK’s chief medical officers are tasked with consulting other experts to draw advice based on wider considerations.

Asked when the chief medical officers will be ready to give their advice, Javid told Sky News’s “Trevor Phillips on Sunday” that he believes it won’t take much longer, but he won’t push them.

“I don’t think they will be taking that much longer, but in the meantime, I have asked the department to work with schools, the school vaccination teams, to start preparing just in case we have a situation where their advice is to recommend it, and then if the government accepts that, then I just want to be able to go ahead with it.”