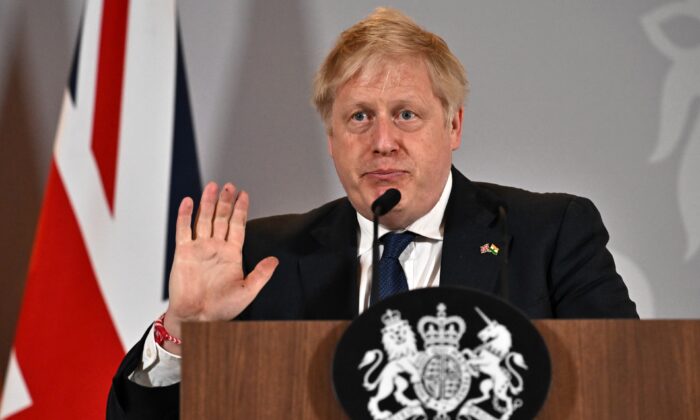 Britain is set to reopen its embassy in the Ukrainian capital Kyiv next week, Prime Minister Boris Johnson has announced.

Johnson made the announcement at a press conference in New Dehli where he has been holding talks with his Indian counterpart Narendra Modi.

Johnson made a surprise visit to Kyiv to meet Ukrainian President Volodymyr Zelenskyy earlier this month.

He told the news conference that the improving security situation around Kyiv means that Britain will be able to reopen its embassy there.

But he accepted a Western intelligence assessment that the conflict could continue for most of the rest of the year, potentially ending with a victory for President Vladimir Putin.

The prime minister said the situation in the region remains “unpredictable,” underlying the need to maintain support for Ukraine.

He said Britain is looking to send tanks to “backfill” in Poland so Soviet-era T-72s—with which Ukrainian crews are familiar—can be released to Ukrainian forces.

In addition to immediate military support, Johnson said Western allies are preparing to offer Ukraine a series of “security guarantees” which should make the country “impregnable” to a future Russian invasion.

While he said it will not be the same as the NATO’s Article 5 guarantee—in which an attack on one member state is considered an attack on all—he hoped it would offer “deterrence by denial.”

“What the Ukrainians want—and I think are now going to get—is a collection of guarantees from like-minded countries about what we can do to back them up with weaponry, with training, and with intelligence-sharing,” he said.

“It will, I hope, enable the Ukrainians to offer deterrence by denial and make sure their territory is so fortified as to be impregnable to further attack from Russia. That is what we need to do.”

The UK initially moved the embassy to the western city of Lviv in February shortly before the Russian invasion began.

Foreign Secretary Liz Truss then announced in early March that ambassador Melinda Simmons had left the country altogether due to the “serious security situation.”

The UK Foreign Office said on Friday that the embassy premises in Kyiv are currently being made secure before staff return, starting with Simmons.

In a statement, Truss said: “The extraordinary fortitude and success of President Zelenskyy and the Ukrainian people in resisting Russian forces, means we will shortly be re-opening our British Embassy in Kyiv.

“I want to pay tribute to the bravery and resilience of the Embassy team and their work throughout this period.”