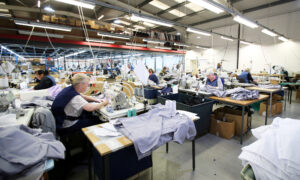 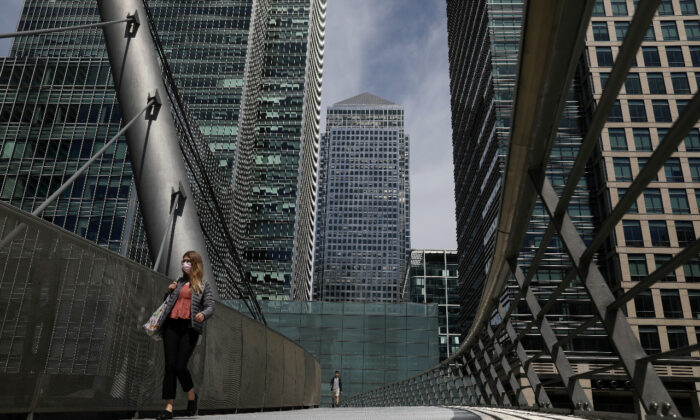 In this file photo a woman wearing a face mask crosses a bridge in front of One Canada Square in Canary Wharf following the outbreak of the CCP virus in London, on May 18, 2020. (Reuters/Simon Dawson)
UK

The UK government will launch a media campaign this week to urge people to return to their workplaces, ramping up Prime Minister Boris Johnson’s calls to get the economy back up to speed after its hammering during the CCP virus lockdown.

Data has shown only 17 percent of workers in British cities had returned to their workplaces by early August, and last week Dame Carolyn Fairbairn, director-general of the Confederation of British Industry (CBI), said that big urban centers looked like “ghost towns.”

“The costs of office closure are becoming clearer by the day,” Fairbairn said in a statement on Friday.

“Some of our busiest city centers resemble ghost towns, missing the usual bustle of passing trade. This comes at a high price for local businesses, jobs and communities.”

Britain’s economic output shrank by more than 20 percent in the April–June period, bigger than all other large industrialized nations, and its recovery has been moderate by comparison.

The government is keen to get people back into the workplace as it would help to stimulate the economy and prevent further damage to city center economies.

“The next stage we’ll look at is specifically the guidance on how to get back to work safely, and we expect to see that later this week,” Johnson’s spokesman said, commenting on the government’s ongoing public information campaign.

A sizeable portion of the UK workforce are parents, with some 4.6 million working households in Britain who have children under 16 years old.

Many of those parents have been working from home since March following the nationwide lockdowns put in place to slow the spread of the CCP (Chinese Communist Party) virus, commonly known as novel coronavirus.

The government is hoping that the reopening of schools, which began in England this week, will help those parents to get back to their workplaces.

The CBI’s Fairbairn backed the government’s ruling to reopen all schools in England this week as a critical back-to-work measure, and emphasized the need for this to be carried out safely and sustainably.

“Getting schools open safely is a vital first step to enable parents to go back to work, but they must stay open wherever possible. This means effective test and trace, and a focus on resilience,” she said in a statement on Friday.

“We welcome the Health Secretary’s recent commitment to a mass testing strategy for 2021,” she added.

While highlighting the success for some businesses and staff of working from home, Fairbairn emphasized a pressing need for a general return to the workplace for UK offices.

“Remote working has been a resounding success for many firms and employees, and none of these benefits should be lost,” she said.

“Many people have never worked harder, keeping businesses afloat from their desks and kitchen tables.”

However, “The UK’s offices are vital drivers of our economy” that “support thousands of local firms, from dry cleaners to sandwich bars,” she said.

Fairbairn also added that offices help train and develop young people, and “foster better work and productivity for many kinds of business.”

“And there are things where you just need to spark off each other and get together in order to make progress.”

Shapps also said that the “vast majority” of employers just want to get their businesses back up and running.

Many economists fear a sharp rise in unemployment as the government winds down its huge job retention scheme, which was extended from June but is due to expire by the end of October.

“Decisions taken over the next few weeks will shape our economy for a decade,” Fairbairn said.