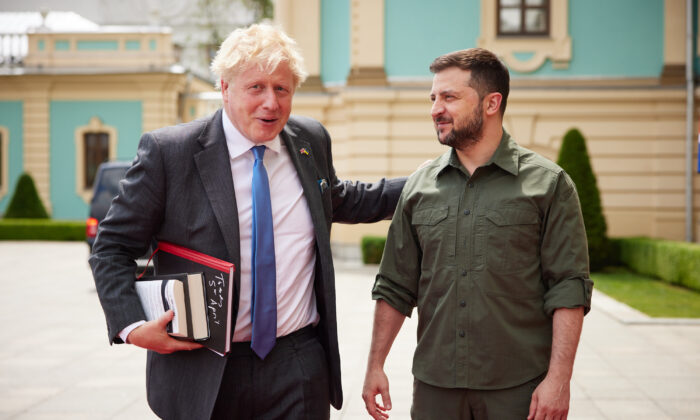 UK to Host Eurovision Song Contest on Behalf of Ukraine

The UK will host the Eurovision Song Contest next year on behalf of Ukraine, it has been confirmed.

Ukraine won the right to host the contest in 2023 after Ukrainian entry Kalush Orchestra triumphed at this year’s competition held in Italy in May, but the European Broadcasting Union (EBU) decided the event cannot be held in the country, which is still at war with Russia.

In a statement released on July 25, the EBU said the contest will now be held in the UK by the BBC.

Martin Osterdahl, Eurovision’s executive supervisor, said: “We’re exceptionally grateful that the BBC has accepted to stage the Eurovision Song Contest in the UK in 2023.”

He said the contest “will showcase the creativity and skill of one of Europe’s most experienced public broadcasters whilst ensuring this year’s winners, Ukraine, are celebrated and represented throughout the event.”

Prime Minister Boris Johnson said the UK would “put on a fantastic contest on behalf of our Ukrainian friends.”

He said that in talks with Ukrainian President Volodymyr Zelenskyy last week they “agreed that wherever Eurovision 2023 is held, it must celebrate the country and people of Ukraine.”

“As we are now hosts, the UK will honour that pledge directly and put on a fantastic contest on behalf of our Ukrainian friends,” Johnson said.

Downing Street said it had been Boris Johnson’s “strong wish” for Ukraine to host the Eurovision Song Contest.

The prime minister’s official spokesman said: “It’s deeply regrettable that a Ukraine-hosted Eurovision will not be possible. But we are confident the BBC and UK will pull out all the stops to make sure it is an event that celebrates and honours the country, the people, and the creativity of Ukraine.”

BBC director-general Tim Davie said it is “a great privilege” to be asked to host “the largest and most complex music competition in the world.”

“The BBC is committed to making the event a true reflection of Ukrainian culture alongside showcasing the diversity of British music and creativity,” he added.

Several British cities, including London, Manchester, and Sheffield have offered to host Eurovision.

Any winner would require a large events space, suitable accommodation and international transport links for the competing countries and their delegations.

Ukraine will automatically qualify for the grand final alongside the so-called big five nations—the UK, France, Germany, Italy, and Spain—who each get a free pass because of their financial contributions to the event.