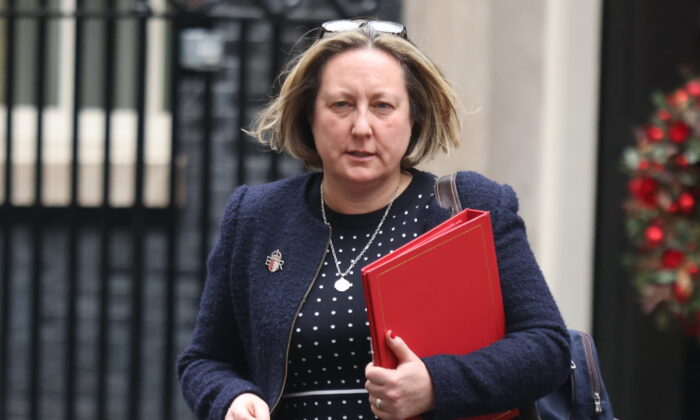 UK to Extend Quotas and Tariffs on Steel Imports

The UK will depart from its “international legal obligations” and extend the quotas and tariffs on five categories of steel imports, a government minister announced on June 29.

Steel goods from Ukraine are exempt from the tariffs, in a bid to support the East European country in its fight against Russia, the minister said.

The main opposition Labour Party welcomed the announcement, but some Conservative MPs were unhappy with the move “down the protectionism route” rather than seeking to cut energy costs for the sector, with a Scottish National Party lawmaker.

Following the exit from the European Union, the UK rolled over EU trade remedies, including safeguards on 19 categories of imported steel products, meaning a certain quota of products could be imported in a category before a 25 percent tax was imposed.

The EU tariffs were initially introduced in 2018 as a retaliatory measure after the U.S. Trump administration imposed tariffs of 25 percent on foreign steel and 10 percent on aluminum.

The UK government last year removed the safeguards on four of the 19 categories but extended the measures by three years for 10 of the categories.

The safeguards on the remaining five categories, namely gas pipes, hollow sections, two categories of large welded tubes, and other welded pipes, were extended by one year, and therefore were due to expire on June 30.

Trevelyan said they would be extended for a further two years, ending on June 30, 2024, along with the safeguards on the other ten categories.

Trevelyan said after considering the recent report by the Trade Remedies Authority, she had concluded that “there would be serious injury or the threat of serious injury to UK steel producers if the safeguard on the five additional categories of steel were to be removed at this time.”

The minister blamed the decision on the “uncertain geopolitical and economic waters,” including the pandemic, Russia’s invasion of Ukraine, and the “global disruptions to the energy markets and supply chains.” She also stressed the strategic significance of the steel industry.

Trevelyan acknowledged that the move “departs from our international legal obligations under the relevant WTO [World Trade Organisation] agreement,” but argued that sometimes “issues may arise where the national interest requires action to be taken which may be in tension with normal rules or procedures.”

Trevelyan told Parliament she had been and would continue “dealing with the International part of these processes” to ensure WTO members “understand why we have taken this decision and therefore will choose not to bring retaliatory charges to any other industry.”

She also said the government decided to suspend quotas and tariffs on Ukrainian steel goods for the next two years.

Shadow International Trade Secretary Nick Thomas-Symonds said the announcement was “a welcome relief to the steel sector,” adding, “It is not anti-competitive to provide a level playing field for our steel industry.” He also supported the suspension of safeguards on imports from Ukraine, but said it was “regrettable” that the government only made the announcement in “the eleventh hour.”

Conservative MP Anthony Mangnall, a member of the International Trade Committee, said, “I never thought being a free trader in this party would be such a unique rare position to hold.”

Mangnall said he’s “fully supportive of supporting the steel industry” but not through protective measures.

“I ask the Secretary of State what message is this meant to send to Australia, New Zealand, Singapore, Japan, or any other country that we’re signing free trade agreements with when we end up citing national interest over the agreements that we’ve signed,” he said.

Peter Bone, Conservative MP for Wellingborough, said, “I do have concerns that we’ve gone down the protectionism route rather than cutting the energy costs.”

“It’s no good talking about green steel in the future if we don’t have an industry,” he said.

Conservative former minister Sir Christopher Chope questioned the government’s plan to guarantee that a derivative industry in his constituency of Christchurch can “get supplies of clean British steel in two years’ time.”

“If not, isn’t she going to need to abandon this doctrine about net zero because what’s more important than actually being able to supply homegrown steel for people in Christchurch to manufacture to export?”

Earlier this month, Prime Minister Boris Johnson’s ethics chief Lord Christopher Geidt resigned, saying he had been narrowly clinging on in his role over Partygate but ultimately quit after being forced into an “impossible and odious” position by Johnson over steel tariffs.