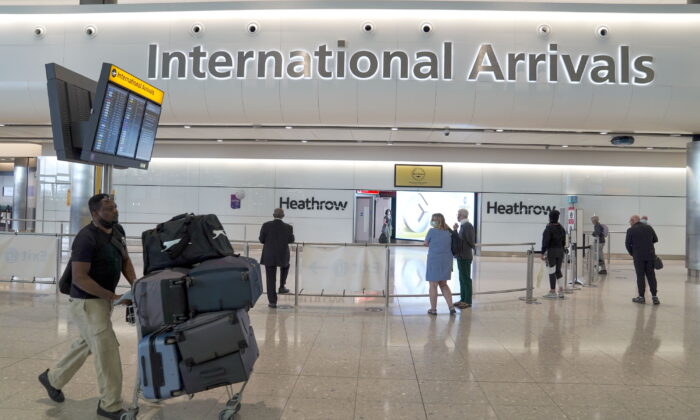 All remaining CCP virus travel rules will end for people who arrive in the UK after 4 a.m. on Friday, transport secretary Grant Shapps has said.

It’s expected to boost the travel industry as the Easter holiday approaches.

“All remaining COVID travel measures, including the Passenger Locator Form and tests for all arrivals, will be stood down for travel to the UK from 4 a.m. on 18 March,” the transport secretary announced on Twitter on Monday.

Currently, all passengers arriving in the UK are required to fill in a passenger locator form. Adults who are not fully vaccinated have to take a pre-departure test and a day two post-arrival test.

Mandatory managed quarantine is required for those who arrive from countries on the “red-list,” which has been empty since Dec. 15 last year.

The government said all the remaining managed hotel quarantine capacity will be fully stood down from the end of March.

Tim Alderslade, chief executive of Airlines UK, said the industry is “grateful” for the timing of the announcement and for “the UK’s leadership in being the first major aviation market to remove all remaining restrictions.”

In Scotland, mandatory mask-wearing in some indoor spaces and on public transport is currently in place, but may end next week.

First Minister Nicola Sturgeon previously said the rule will be downgraded to guidance from March 21 “assuming no significant adverse developments in the course of the virus.”

The legal requirement for businesses to retain customer contact details for contact tracing is also expected to end on March 21.

There have been some calls for the government to delay the lifting of the restrictions due to a surge in the official numbers of cases and hospitalisations. Sturgeon is expected to give an update on Tuesday afternoon.

But Sturgeon made clear the Scottish government would “continue to ask those who test positive for COVID to isolate for the recommended period.” Financial support for self-isolation also remains.

Mandatory face coverings and self-isolation rules still apply in Wales, but the rules are due to expire on March 28 “if the current public health situation remains stable.”