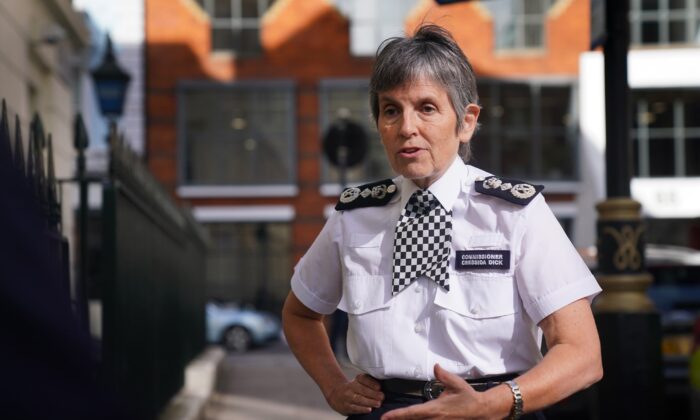 UK to Deploy Undercover Police Outside Clubs to Protect Women

The UK’s biggest police force on Wednesday unveiled a plan to deploy undercover officers outside bars and clubs in a bid to reduce violence against women and girls.

The measure is part of the Metropolitan Police’s plans designed to ensure women’s safety after Sarah Everard, a 33-year-old marketing executive, was raped and murdered by a serving officer of the force, who fake-arrested her while she was walking alone.

Met Commissioner Dame Cressida Dick met with community groups from Lambeth and Southwark on Wednesday to discuss the force’s plans to reduce violence against women and girls, boost the number of criminals brought to justice, and also tackle sexual misconduct and domestic violence by its own officers and staff.

As part of the plan, the Met will pilot a scheme in the two boroughs where teams of plain-clothed and uniformed officers will be deployed together to identify predators near pubs, bars, and clubs.

The undercover officers will identify “anyone who may be displaying predatory behaviour” in public spaces and ask uniformed colleagues to step in when needed.

Dick said, “This plan details how we will do more and better to keep women and girls safe.”

“It brings together all of our work to prevent male violence against women and girls, in public spaces as well as domestic settings and online; to target perpetrators, and with the wider criminal justice service, to improve outcomes for victims,” she said.

“We will increase officers’ skills and maximise the impact of key units such as our predatory offender units, town centre teams, and other specialist units, and further improve digital investigation, intelligence, and the quality of case files.”

Everard was walking home in the evening on March 3 after having dinner at a friend’s house in Clapham, south London, when she was kidnapped by then Metropolitan Police officer Wayne Couzens, who made a fake arrest under the COVID-19 regulations, drove Everard to Kent, before killing her and disposing of her remains.

Couzens, 48, was handed a whole life order on Sept. 30. He will most likely die in prison as the sentence comes without any possibility of parole or conditional release unless there are exceptional compassionate grounds to warrant it.

Home Secretary Priti Patel has said the Met has some “serious questions” to answer.

To allay public concerns, Dick announced last month that undercover officers will video-call a uniformed sergeant to prove their identity if they ever need to stop a lone woman.