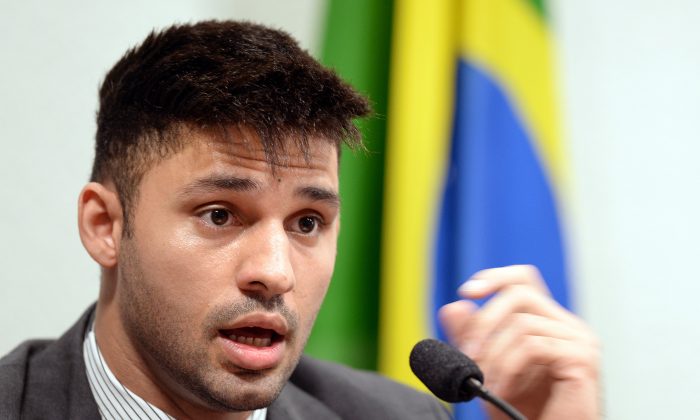 David Miranda testifies before the investigative committee of the Senate that examines charges of espionage by the United States in Brasilia on October 9, 2013, following press reports of US electronic surveillance in Brazil based on leaks from Edward Snowden (EVARISTO SA/AFP/Getty Images)
UK

Judges have ruled that the UK’s anti-terror law is “incompatible” with European human rights legislation, in a case brought by the partner of the journalist at the centre of the Edward Snowden revelations.

However, David Miranda, partner of Guardian journalist Glenn Greenwald, lost his Court of Appeal claim that police acted unlawfully in detaining him at London’s Heathrow Airport in 2013.

Miranda was held for nine hours en-route from Germany to Brazil while carrying files related to information obtained by the US intelligence whistleblower Snowden.

Senior judge John Dyson said police had a “permitted purpose” to use Schedule 7 of the Terrorism Act, which gives officials stop powers to question and detain passengers at Britain’s borders.

“They were entitled to consider that material in his possession might be released in circumstances falling within the definition of terrorism.”

But Miranda claimed victory in another ruling on the scope of Britain’s Terrorism Act.

The judges concluded that Schedule 7 did not define closely enough the circumstances under which the authorities could seize journalistic material, contradicting Article 10 of the European Convention on Human Rights, which provides the right to freedom of expression.

The judges ruled that the “compelling national security interests” outweighed Miranda’s rights under Article 10, but that Schedule 7, in general, is not “prescribed by law” with respect to journalistic information or material.

They issued a certificate of incompatibility, a rare instrument issued when judges decide that British law is inconsistent with international human rights obligations.

MPs must now decide whether to amend the law to bring it in line with the convention.

Greenwald, who helped break the Snowden revelations on the extent of US intelligence operations, wrote on Twitter that it was a “huge win”.

“Terrorism Act violates fundamental rights due to no protections for journalists,” he added.

Rosie Brighouse, legal officer for rights group Liberty, said the judgment was “a major victory for the free press”.

“Schedule 7 has been a blot on our legal landscape for years – breathtakingly broad and intrusive, ripe for discrimination, routinely misused,” she added.

Approximately 60,000 people a year are quizzed under Schedule 7.

The government insists that it is needed to investigate passengers where there is insufficient information to justify an arrest.