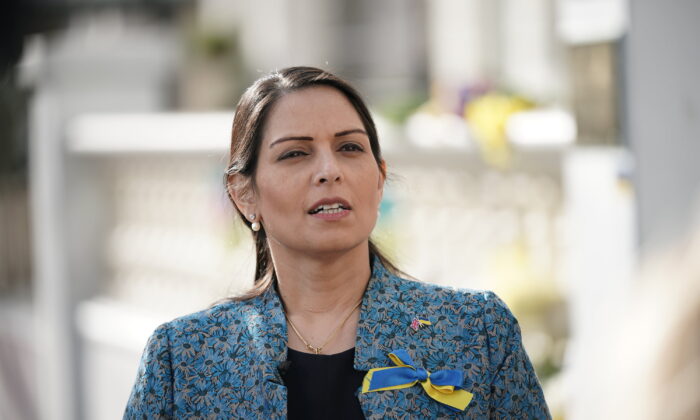 UK Home Secretary Priti Patel speaking to the media outside the Ukrainian embassy in London, on March 6, 2022. (Yui Mok/PA)
UK

The UK government has simplified its visa procedures to enable Ukrainians fleeing the war with Russia to file their applications entirely online, Home Secretary Priti Patel has announced.

Addressing the House of Commons on Thursday, Patel said: “From Tuesday, I can announce that Ukrainians with passports will no longer need to go to a visa application centre to give their biometrics before they come to the UK.

“Instead, once their application has been considered and appropriate checks completed, they will receive direct notification that they are eligible for the scheme and can come to the UK.”

Under the new rules, Ukrainians with passports will be able to apply for visas “fully online” and will not need to submit their biometric information until they have arrived in Britain.

“This will mean that visa application centres across Europe can focus their efforts on helping Ukrainians without passports,” said Patel.

The UK government has come under pressure from both Conservative and opposition lawmakers to do more to take in Ukrainian refugees.

While the European Union allows visa-free travel for Ukrainian refugees, Patel insisted that visas are necessary to guarantee security.

Citing the 2018 Novichok attack on former double agent Sergei Skripal in Salisbury, which UK police said was carried out by Russian military intelligence service GRU, the home secretary said: “What happened in Salisbury showed what Putin is willing to do on our soil. It also demonstrated that a small number of people with evil intentions can wreak havoc on our streets.”

Patel said she was able to relax the visa rules following fresh advice from the security agencies.

Ukrainian ambassador to the UK Vadym Prystaiko called for an end to the “bureaucratic red tape” restricting refugees from seeking sanctuary in Britain.

He told BBC’s “Question Time”: “I just wanted to tell you that most of our men are staying behind and fighting, so … most of the people you will see are just women with children, which I totally hope they’re not posing any threat, especially a terrorist threat to the UK.

“So that’s why I hope and I beg that the procedures will be dropped and every bureaucratic red tape should be cancelled.”

Education secretary Nadhim Zahawi said plans were under way in his department to take 100,000 children into British schools.