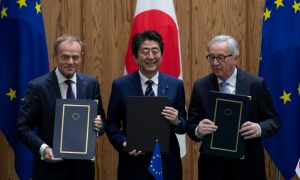 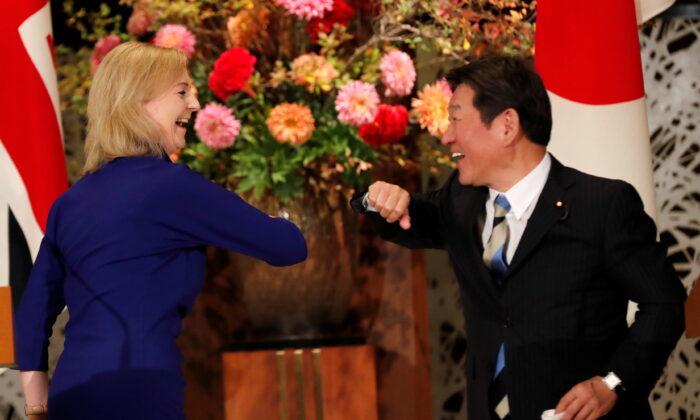 Britain signed its first major post-Brexit free trade agreement with Japan on Friday, in what the government hailed as a “historic moment”.

“How fitting it is to be in the Land of the Rising Sun to welcome in the dawn of a new era of free trade,” Truss told reporters at the signing ceremony.

“Today is a landmark moment for Britain,” she said in a statement. “It shows what we can do as an independent trading nation, as we secure modern and bespoke provisions in areas like tech and services that are critical to the future of our country and the reshaping of our economy.”

Under the deal, which was agreed in principle last month, UK businesses will benefit from tariff-free trade on 99 percent of exports to Japan, the government said in a statement. It is estimated to increase trade by 15.2 billion pounds ($19.4 billion).

The deal removes Britain’s tariffs on Japanese cars in stages to zero in 2026, which is the same as in the Japan–EU trade agreement.

The UK currently benefits from the EU–Japan free trade agreement, which entered into force in February 2019, creating the world’s largest open economic area covering a third of the world’s economy.

But the EU–Japan deal will stop covering the UK when the Brexit transition period ends on Dec. 31, 2020.

Since formally leaving the EU on Jan. 31, Britain has focused on negotiating new trade deals with countries around the world.

The UK–Japan deal had been widely seen as one the easiest within reach for London, being based largely on the EU–Japan agreement.

The deal ensures continuity with the earlier EU agreement and adds new areas for cooperation such as e-commerce and financial services, Motegi said after the signing.

He said that he had agreed with Truss to work together so that the deal will come into force on Jan. 1, 2021.

The British government sees “much wider strategic significance” in this deal, Truss said, as it “opens a clear pathway to membership” of the Comprehensive and Progressive Agreement for Trans-Pacific Partnership (CPTPP).

Tom Ozimek, Reuters, and The Associated Press contributed to this report.