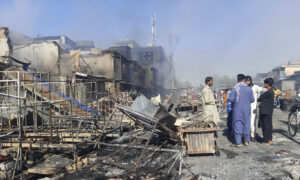 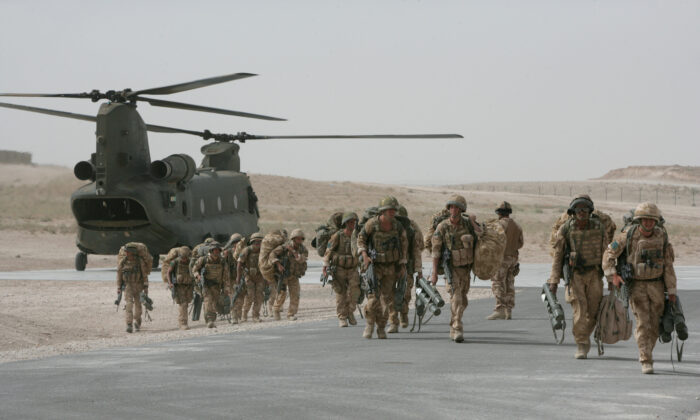 Some 600 British troops are being sent to Afghanistan to help Britons to leave the country, as Taliban forces continue to sweep into the major cities, the Defence Minister has announced.

“The security of British nationals, British military personnel, and former Afghan staff is our first priority,” said Defence Minister Ben Wallace in a statement on Aug. 13.

He said they are set to arrive in the coming days and that they will also support the remaining diplomatic presence in the capital city of Kabul.

The UK diplomatic presence in the capital is being whittled down to a skeleton staff who will handle only administration relating to what is essentially an evacuation.

“UK troops will provide force protection and logistical support for the relocation of British nationals where required and assist with the acceleration of the Afghan Relocation and Assistance Policy (ARAP),” said the Ministry of Defence, in a statement.

“This will help to make sure interpreters and other Afghan staff who risked their lives working alongside UK forces in Afghanistan can relocate to the UK as soon as possible.”

The announcement came as Afghanistan’s second-biggest city Kandahar, a key economic hub, fell to the Taliban.

A spokesman for the Taliban said on Friday they had captured three other cities, including the capital of Helmand province.

They now control most of northern Afghanistan and about a third of the country’s regional capitals.

The United States has announced it will send 3,000 troops to assist with the evacuation of Americans.

According to a U.S. intelligence assessment this week, the Taliban could isolate Kabul within 30 days and take it over in 90.

General Sir Nick Carter, the head of the British armed forces, warned that a dangerous “security vacuum” risks opening up and that the country could once again become a breeding ground for international terrorism.

Official advice last week told all British nationals to leave as soon as possible while there are still commercial travel options available.

They have also been urged to contact the Embassy in Kabul as soon as possible for assistance.

In April the UK government announced a scheme offering visas to Afghans who had worked for the British during their operations in Iraq, and who are now a target for Taliban retribution.

According to the government, over 3,100 such staff and their families have successfully applied, “with more than 1,800 of them arriving over the last few weeks alone.”

The Ministry of Defence said that the scheme would be accelerated in the coming days.

The rapid collapse of Afghanistan’s government forces under Taliban advance has reignited criticism of the withdrawal of American and British military presence.

The chairman of the Foreign Affairs Select Committee, Conservative Tom Tugendhat MP, wrote on Twitter, “A hasty exit is not a sign of success. Needing reinforcements to keep the door open as you leave is a sure sign of failure.”

Lord Richards, a former chief of defence staff, told BBC’s Newsnight: “I think they will be doing what we call a non-combatant evacuation operation. They will hold the ring for as long as they can and then get out along with the people they have helped.”

He added: “It is a tacit—explicit really—admission of failure. Of a gross, a dismal failure of geostrategy and of statecraft.”