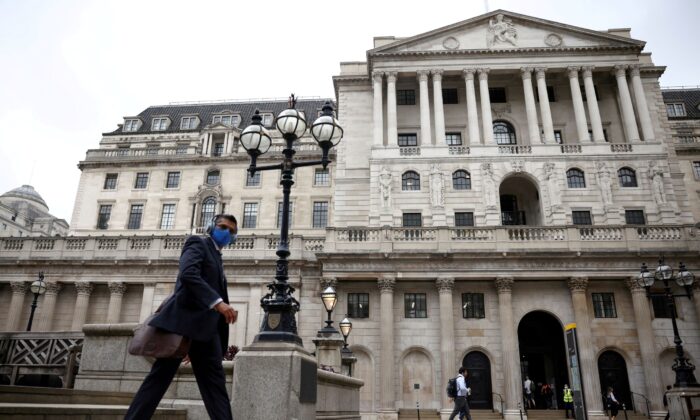 A person walks past the Bank of England in the City of London financial district, in London on June 11, 2021. (Henry Nicholls/Reuters)
UK

Soaring inflation expected to climb to more than 13 percent by the end of the year has prompted the UK’s central bank to deliver its biggest interest rate increase in 27 years, even as officials say that the country is heading into a recession.

The Bank of England announced on Aug. 4 that its rate-setting body, the Monetary Policy Committee (MPC), voted 8–1 to raise the key interest rate by 50 basis points to 1.75 percent.

The lone dovish view on the committee called for a 25-basis-point hike, while all nine MPC members expressed concern about decades-high inflation and further upward pressure on prices, vowing to keep raising rates at future meetings if needed.

“The Committee will be particularly alert to indications of more persistent inflationary pressures, and will if necessary act forcefully in response,” the MPC said in a statement.

Members noted the risk that persistently high inflation could fuel a “more enduring” wage-price spiral as the labor market is expected to stay tighter for longer than previously assumed.

Inflationary pressures in the UK and the rest of Europe have “intensified significantly” since the MPC’s last policy report in May, according to the committee.

“That largely reflects a near doubling in wholesale gas prices since May, owing to Russia’s restriction of gas supplies to Europe and the risk of further curbs,” the committee stated.

Expecting the wholesale energy cost jump to feed through to retail energy prices, the MPC stated that it expects near-term inflation to rise higher than previously forecasted.

“CPI inflation is expected to rise more than forecast in the May Report, from 9.4 [percent] in June to just over 13 [percent] in 2022 Q4, and to remain at very elevated levels throughout much of 2023, before falling to the 2 [percent] target two years ahead,” the MPC stated.

The stickiness of inflationary pressures in the UK is reflected in the MPC’s prediction for inflation, as measured by the Consumer Price Index (CPI), to fall only slightly to 9.5 percent a year from now.

Persistent inflation is expected to intensify the cost-of-living crisis in the UK as real wages, which are adjusted for the rate of inflation, are predicted to fall by the most in decades.

Rising energy costs are the chief factor behind a deterioration in the UK’s economic outlook, according to the MPC, which expects the country to enter a recession later this year.

“Output is projected to fall in each quarter from 2022 Q4 to 2023 Q4,” the committee stated. “Growth thereafter is very weak by historical standards.”

Still, the MPC stated that there were “extremely large” uncertainties around the economy, which could make the downturn less—or more—severe than the baseline forecast.