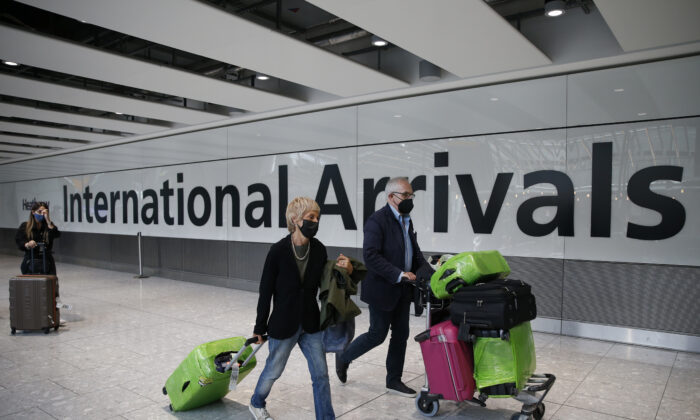 All remaining CCP virus travel restrictions for people arriving in the UK have been removed, in a move hailed by tourism companies as the “final game-changer” for the industry.

From March 18, passengers arriving in the UK are no longer required to fill in a passenger locator form, and adults who are not fully vaccinated no longer need to take a pre-departure test and a day two post-arrival test.

Transport Secretary Grant Shapps said: “I said we wouldn’t keep travel measures in place for any longer than necessary, which we’re delivering on today—providing more welcome news and greater freedom for travellers ahead of the Easter holidays.”

Aviation minister Robert Courts said: “Everything we have worked for—every jab, every test, and the sacrifices made by the whole country—means that finally, nearly two years on, we can all travel without bureaucratic restrictions.”

He said that he hopes to “never see a day” where the COVID-19 travel curbs were reintroduced.

Health Secretary Sajid Javid said the final restrictions could now be lifted due to the success of the vaccination programme, but the government will continue to monitor potential new variants of the CCP (Chinese Communist Party) virus.

The Department for Transport (DfT) said a “range of contingency measures” would be kept in reserve so ministers could take “swift and proportionate action” in the face of potential new variants.

The tourism and airline industries have welcomed the move as they see a sharp rise in demand for foreign holidays.

Derek Jones, chief executive of Kuoni, a tourism company, said bookings had surged in recent months for destinations including the Maldives, Mauritius, the Caribbean, and continental Europe.

“The removal of all travel restrictions is the final game-changer—people can now go on holiday or visit family and friends overseas without all of the stress that comes with testing before they return home,” he said.

“Travel has been in turmoil for two years but now it’s back.”

Tim Alderslade, chief executive of industry group Airlines UK, said “the time to return to the skies is now” as travellers prepare for Easter and summer.

“People want to go away, and there is a real air of positivity within the sector now,” he said.

Heathrow, the UK’s largest airport, dropped the requirement for passengers to wear masks on March 16.

Virgin Atlantic and British Airways also announced they are ditching mask requirements on some routes.