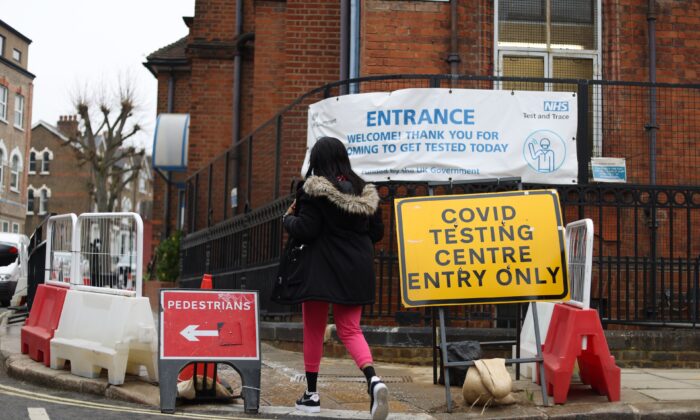 The UK government is scrambling to secure supplies of COVID-19 tests to meet a surge in demand.

The demand for testing has increased sharply as the government tries to slow the spread of the new Omicron variant of the CCP (Chinese Communist Party) virus. During a visit to a vaccination centre on Wednesday, Prime Minister Boris Johnson urged people to get tested before New Year’s Eve festivities.

But at times on Wednesday, there were no PCR or lateral flow tests available to order online.

Leyla Hannbeck, chief executive of the Association of Independent Multiple Pharmacies, said people are often unable to find COVID-19 tests in chemists because of “patchy” and “inconsistent” supplies.

In a letter to lawmakers, Health Secretary Sajid Javid said on Thursday that the supply of lateral flow devices (LFD)—a self-test for COVID-19—was being tripled in January and February to 300 million per month.

“To respond to anticipated demand over the coming few weeks we are buying hundreds of millions more LFD tests, bringing new products on board, and accelerating their deployment to the public,” he said.

But “in light of the huge demand for LFDs seen over the last three weeks, we expect to need to constrain the system at certain points over the next two weeks to manage supply over the course of each day, with new tranches of supply released regularly throughout each day.”

Previously, ministers and officials had insisted they had sufficient stocks of COVID-19 tests but the problems were in delivering them to people’s homes or pharmacies.

But in his conversation with senior Conservative MP Sir Roger Gale on Wednesday, Javid said there were global supply issues and “there isn’t a quick fix.”

Gale told the PA news agency: “We are now facing the situation where Number 10 is saying go and get tested and the Department of Health is saying we haven’t got the tests, we can’t do it.”

He said Javid is “busting a gut” to get supplies, “but we’re competing with a global market.”

Wes Streeting, the opposition Labour party’s shadow health secretary, said: “People are trying to do the right thing, follow the government’s own advice, and test themselves regularly, but are prevented by the Conservative government’s incompetence.”

The UK Health Security Agency said on Wednesday that eight million lateral flow test kits would be made available to pharmacies by New Year’s Eve.

A spokesman said: “We are delivering record numbers of lateral flow tests to pharmacies across the country, with almost eight million test kits being made available to pharmacies between today and New Year’s Eve.”