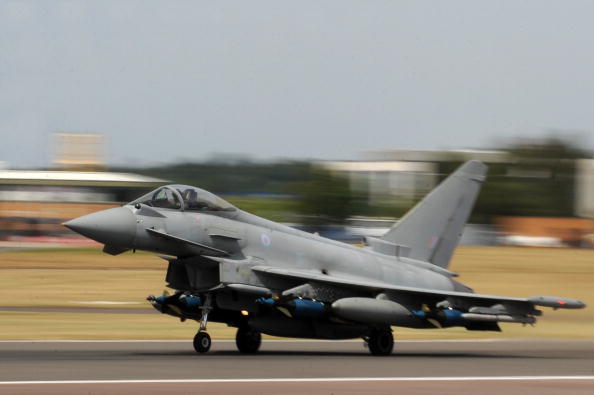 A BAE Typhoon takes off ahead of an air display at the Farnborough International Airshow in Hampshire, on July 20, 2010. (Ben Stansall/AFP/Getty Images)
UK

Britain’s defense ministry said that its Royal Air Force scrambled two fighter jets as Russian planes got near U.K. airspace on Monday, Jan. 15, according to reports.

A RAF spokesman told The Sun that it confirmed that “Typhoon aircraft from RAF Lossiemouth scrambled this morning, this is a live operation and therefore we will not be providing any additional information until the mission is complete.”

The RAF also said it issued a “quick reaction alert,” deploying Eurofighter Typhoon aircraft from Scotland’s Lossiemouth base, The Associated Press reported. Nothing, however, was intercepted, according to some military authorities.

The Telegraph reported that U.K. fighters escorted the Russian aircraft north away from the U.K., and the Ministry of Defense stated that “at no point” did the Tupolev TU-160 Blackjack bombers enter British airspace.

The Russian Blackjacks got within 30 nautical miles (34.5 miles) of the U.K. airspace, according to the ministry.

Off the Scottish east coast at Wick…#QRA Voyager & Typhoon pic.twitter.com/1zTh2JCiGA

“The Russian aircraft were initially monitored by a variety of friendly nation fighters and subsequently intercepted by the RAF in the North Sea,” the RAF told the Telegraph.
Air traffic monitors showed RAF Typhoons tailing a British Voyager aircraft off Caithness near Scotland’s east coast on Monday morning. A Voyager, which is used to refuel planes, was deployed from RAF Brize Norton, the Sun reported.

The plane then headed south toward Dundee and Edinburgh at around 10 a.m. as the Russian jets got near Denmark and the Netherlands, the paper reported.

Officials did not say how many Typhoons were involved in the operation.

There has been some Russian military activity near the U.K. in recent months, forcing the U.K. to scramble jets and ships. On Jan. 8, the U.K.’s HMS Westminster, a Portsmouth-based Type 23 frigate, was tasked to intercept two Russian warships and two supporting vessels near U.K. waters.