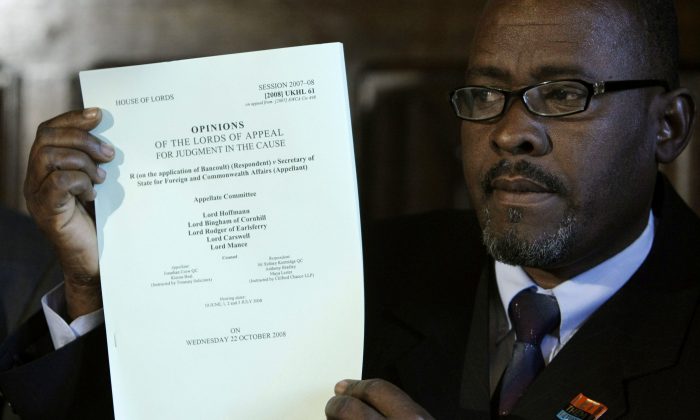 Chagos Islander Olivier Bancoult holds up a judgment paper at the start of a news conference inside the Houses of Parliament in London in this Oct. 22, 2008 file photo. after a court ruling decided Chagos Islanders are not allowed to return to their homeland. Indian Ocean islanders who were forced from their homes decades ago to make way for a U.S. military base will not be allowed to return, the British government has announced. (AP Photo/Matt Dunham, File)
International

LONDON—Indian Ocean islanders who were forced from their homes decades ago to make way for a U.S. military base will not be allowed to return, the British government has announced.

Britain evicted about 2,000 people from the tropical Chagos archipelago, a British colony, in the 1960s and 1970s so the U.S. military could build an air base on Diego Garcia, the largest of the islands.

Chagossians have fought in British courts for years to return to the other islands. In June, the Supreme Court rejected their most recent appeal.

The British government announced Wednesday that it will continue to lease Diego Garcia to the U.S. until 2036. It said it has decided against letting the islanders return “on the grounds of feasibility, defense and security interests, and cost to the British taxpayer.”

Foreign Office Minister Joyce Anelay said it would be impractical to set up “a small remote community on low-lying islands.”

Russia Won’t Give up Disputed Islands

“These are British subjects, and they are entitled to the same rights and freedoms and self-determination that all British citizens should have,” Rosindell told lawmakers in the House of Commons.

The government promised 40 million pounds ($50 million) in compensation to the displaced islanders.

The eviction of the islanders from their home halfway between Africa and Southeast Asia has long been controversial for Britain. U.K. authorities have expressed regret for the treatment of the islanders, but successive governments have blocked their attempts to return.

The key obstacle is the strategically important Diego Garcia base, which has supported U.S. military operations from Vietnam to Iraq and Afghanistan. In 2008, the U.S. acknowledged it also had been used for clandestine rendition flights of terrorist suspects.