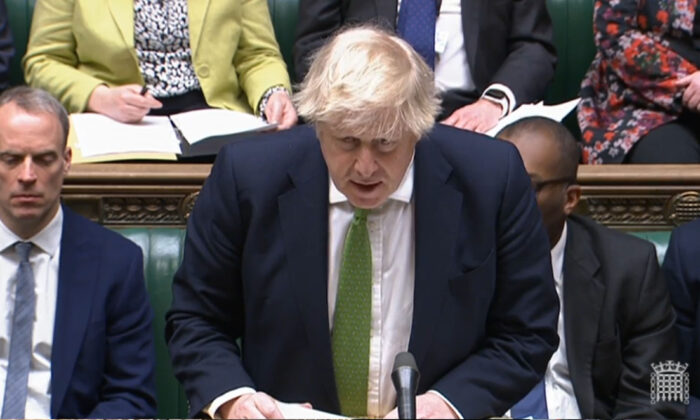 Prime Minister Boris Johnson updates MPs on the latest situation regarding Ukraine, in the House of Commons in London, on Feb. 22, 2022. (PA)
UK

Putin announced on Feb. 21 that Russia will regard two areas in Ukraine’s Donbas region as independent, and signed a decree authorising Russian troops to be sent into the area for so-called “peacekeeping operations.”

Addressing the House of Commons on Feb. 22, Prime Minister Boris Johnson described Moscow’s move as a “renewed invasion” of Ukraine, and warned Putin is “establishing the pretext for a full-scale offensive.”

He told MPs: “Now the UK and our allies will begin to impose the sanctions on Russia that we have already prepared using the new and unprecedented powers granted by this House to sanction Russian individuals and entities of strategic importance to the Kremlin.”

“Any assets they hold in the UK will be frozen, the individuals concerned will be banned from travelling here, and we will prohibit all UK individuals and entities from having any dealings with them,” he said.

“This the first tranche, the first barrage, of what we are prepared to do and we hold further sanctions at readiness to be deployed.”

The prime minister said the West “must now brace ourselves for the next possible stages of Putin’s plan—the violent subversion of areas of eastern Ukraine by Russian operatives and their hirelings followed by a general offensive by the nearly 200,000 Russian troops gathered on the frontiers at peak readiness to attack.”

He said: “We cannot tell what will happen in the days ahead, but we should steel ourselves for a protracted crisis. The United Kingdom will meet this challenge side by side with our allies, determined that we will not allow Putin to drag our continent back into a Hobbesian state of nature.”

Labour leader Sir Keir Starmer welcomed the sanctions, but said “we must be prepared to go further.”

He said he understands the tactic of holding back sanctions to try to deter an invasion of the rest of Ukraine, “but a threshold has already been breached.”

Starmer said a sovereign nation “has been invaded in a war of aggression,” and “if we do not respond with the full set of sanctions now, Putin will once again take away the message that the benefits of aggression outweigh the costs.”

He said Russia should be excluded from financial mechanisms like Swift, trading in Russian sovereign debt should be banned, Russia Today should be prevented from “broadcasting its propaganda around the world,” and Nord Stream 2 should be cancelled.

Former prime minister Theresa May said the world was in the “gravest of times” and called attention to “a wider worldwide trend of authoritarian states trying to impose their way of thinking on others.”

“The battle in which we must now engage is nothing more or less than the defence of democracy itself,” she warned.

Johnson said his predecessor was “entirely right,” adding: “That is what’s at stake and what happens in Ukraine now is being watched around the world, and the echoes will be heard in Taiwan, in East Asia, and throughout the world.”