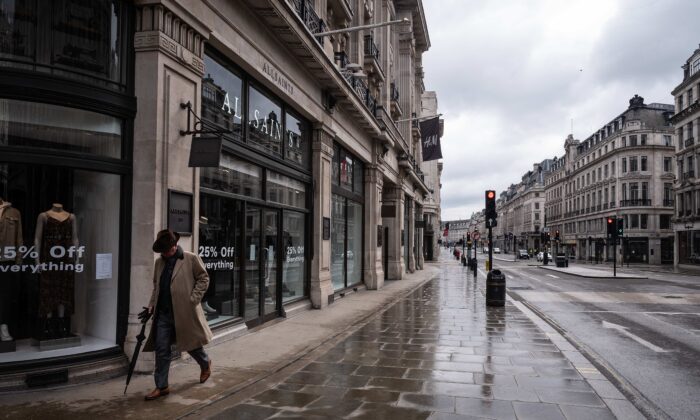 A man walks up a deserted Regent Street in London on March 30, 2020. (Leon Neal/Getty Images)
UK

The UK government plunged the country into COVID-19 lockdowns without properly considering the social and economic costs, and dissenting voices in the Cabinet and in the scientific community were suppressed, former Chancellor Rishi Sunak has revealed.

The government imposed three national lockdowns on the population during the pandemic, but it never properly examined the likely side-effects of the drastic measures, said Sunak, who is now a contender in the race to replace Boris Johnson as Conservative Party leader and UK prime minister.

He said one of the government’s biggest mistakes was giving too much power to scientists and claimed the government’s Scientific Advisory Group for Emergencies (SAGE) edited its minutes to hide dissenting opinions.

In an interview with The Spectator magazine, the former chancellor said he “wasn’t allowed to talk about the trade-off” during the early phases of the pandemic.

Number 10 Downing Street instructed ministers on how to handle questions about the side-effects of lockdown. “The script was not to ever acknowledge them. The script was: oh, there’s no trade-off, because doing this for our health is good for the economy,” said Sunak.

The side-effects of lockdown, such as the mounting backlog in the National Health Service, was “never part of” Cabinet discussions, he said, adding that he had often been a lone voice of resistance within the government.

Sunak said one of his big concerns was about the “fear messaging,” which his Treasury team worried could have long-lasting effects.

The posters showing COVID-19 patients on ventilators, he said, were the worst. “It was wrong to scare people like that.”

According to Sunak, when he said in a September 2020 speech that it was time to learn to “live without fear,” the Cabinet Office was “very upset” about that.

The government was always keen to stress its lockdown decision were simply “following the science” rather than political decisions. As a result, scientists on the SAGE committee were given the power to decide whether the country would lock down or not.

But, Sunak said, the committee ignored dissenting voices among its own members.

He said a Treasury official who sat on all SAGE meetings told him that there were often disagreements among the scientists, but these dissenting voices were often edited out from the minutes.

The government’s decisions were led by these one-sided SAGE analyses, which described horrifying scenarios that would come to pass if lockdown was not imposed or extended.

But ministers were not told about how these scenarios had been calculated, said Sunak.

“I was like, ‘Summarise for me the key assumptions, on one page, with a bunch of sensitivities and rationale for each one,’” Sunak said. “In the first year I could never get this.”

He said the Treasury would never recommend policy based on unexplained modelling.

“This is the problem,” he said. “If you empower all these independent people, you’re screwed.”

Sunak said that if the trade-offs had been acknowledged from the beginning, in March 2020 when the first lockdown was imposed, then different decisions could have been taken.

“We shouldn’t have empowered the scientists in the way we did,” he said.

“And you have to acknowledge trade-offs from the beginning. If we’d done all of that, we could be in a very different place.”

Sunak’s remarks triggered a backlash from SAGE members and the government.

SAGE member Professor Graham Medley said it was the government that made the decisions, not the scientists.

He said: “Government have the power, so if one member of Cabinet thinks that scientific advice was too ‘empowered’ then it is a criticism of their colleagues rather than the scientists.

“The SAGE meetings were about the science, not the policy options, and the minutes reflect the scientific consensus at the time.”

A Downing Street spokesman said: “Throughout the pandemic, public health, education and the economy were central to the difficult decisions made on COVID restrictions to protect the British public from an unprecedented novel virus.

“At every point, ministers made collective decisions which considered a wide range of expert advice available at the time in order to protect public health.”