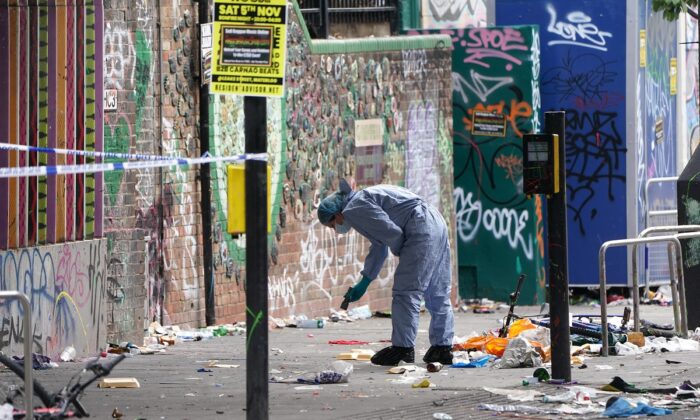 A forensics officer working at the scene where a 21-year-old man was stabbed during the Notting Hill Carnival in Ladbroke Grove, west London, on Aug. 30, 2022. (PA)
UK

A 21-year-old man was stabbed to death at the Notting Hill Carnival on Monday night, the first murder at the event for 18 years.

The dead man was named as Takayo Nembhard—a rapper from Bristol who was better known as TKorStretch—by his manager, Chris Patrick.

Alison Heydari, the Metropolitan Police commander in charge of policing the event, said: “The atmosphere over the past two days has been largely positive and good-natured as carnival should be. Regrettably, on Monday evening we saw a number of violent incidents and a 21-year-old man has lost his life. Our thoughts are with his family as they come to terms with their terrible loss.”

Patrick said Nembhard was visiting the carnival with his younger sister and some friends when he was attacked beneath the Westway flyover in Ladbroke Grove.

The rapper—who had 300,000 plays on one of his songs on Spotify—posted a video last month in which he sung about gang and knife crime and described the perpetrators as “devil’s evil kids.”

‘His Talent Was Endless’

Patrick wrote on his Instagram account: “His talent was endless and I can tell you guys he was close to greatness!…He came from Bristol to simply have a good time at the London carnival and this is the end result!”

The Mayor of London, Sadiq Khan, said he was “sickened” by the incident and added, “Violence has no place on our streets and we are doing everything in our power to root it out.”

The Metropolitan Police said a total of 209 arrests had been made at the carnival, including 46 for assault, 36 for possession of drugs, 33 for possession of an offensive weapon, 27 public order offences, and eight sexual assaults.

The Notting Hill Carnival is a celebration of Caribbean culture which has taken place every year since 1966, and the last murder there took place on Aug. 30, 2004 when Lee Subaran, 27, was shot dead at an unofficial carnival party.

Three men—Tafari Dacas, 29, Leon Roberts, 24, and Shane Taylor, 26, were all jailed for life in July 2005. The trial at the Old Bailey heard the three were members of a gang called the Mus Love Crew who shot Subaran when he stood up for his friend, who was being bullied.

Three other members of the Mus Love Crew were also jailed after a retrial.