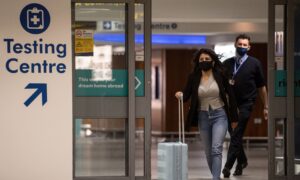 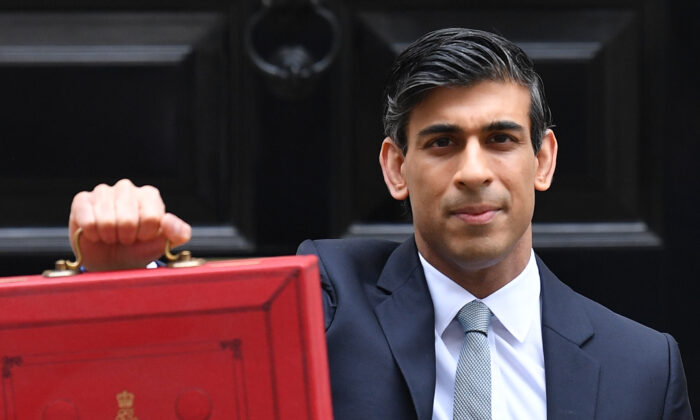 Britain's Chancellor of the Exchequer Rishi Sunak poses with the Budget Box as he leaves 11 Downing Street before presenting the government's annual budget to Parliament in London on March 3, 2021. (Justin Tallis/AFP via Getty Images)
UK

Britain’s Conservative government said on March 3 it will raise taxes for businesses in a bid to improve public finances, which have been hit hard during the CCP virus pandemic.

Delivering the annual budget in the House of Commons, Chancellor of the Exchequer Rishi Sunak announced that corporation tax will be raised to 25 percent from 19 percent from 2023, by which time he predicted the economy should be past the COVID-19 crisis.

An important moment is upon us. A moment of challenge and of change.

Of difficulties, yes, but of possibilities too.

This is a Budget that meets that moment. ‘👇https://t.co/5zRdJ6Ycpa

Sunak said earlier this week that Britain’s public finances are under “enormous strains” as a result of huge government borrowing during the pandemic.

The extra funding required for government schemes to support businesses hit by lockdown measures, combined with reduced tax revenues and a fall in gross domestic product (GDP), have all helped push Britain’s public sector net debt to a new high.

“Our economy has shrunk by 10 percent—the largest fall in over 300 years. Our borrowing is the highest it has been outside of wartime,” Sunak told Parliament on Wednesday.

“It’s going to take this country—and the whole world—a long time to recover from this extraordinary economic situation. But we will recover,” he said.

Sunak said the government “will continue doing whatever it takes to support the British people and businesses through this moment of crisis.”

The Coronavirus Job Retention Scheme, which is commonly known as the “furlough scheme” and pays 80 percent of the wages to workers who cannot work due to the CCP (Chinese Communist Party) virus lockdown measures, was given a five-month extension until September.

Sunak also pledged more help for the self-employed, the continuation of an emergency increase in welfare payments, and an extension of a VAT cut for the hospitality sector.

But he made clear the continued expansion of government spending has consequences.

“Once we are on the way to recovery, we will need to begin fixing the public finances—and I want to be honest today about our plans to do that,” he told lawmakers.

But he stressed that, even after the hike in corporation tax, the UK’s tax rate will remain competitive.

“Even after this change the United Kingdom will still have the lowest corporation tax rate in the G7—lower than the United States, Canada, Italy, Japan, Germany, and France,” he said.