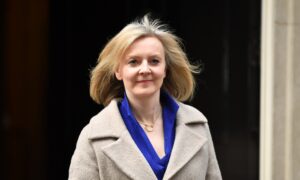 The UK’s National Environment Research Council is scheduled to launch a nearly $300 million polar research vessel in 2019, and it asked the public to come up with possible names for the ship, and vote on it.

“It’s an absolutely brilliant name,” wrote James Hand, who came up with the name.

The ship is designed to endure Arctic weather and break through polar ice to facilitate research on ice caps and the Arctic region in general, including areas that had been previously inaccessible.

“The Antarctic Peninsula and the Arctic are two of the fastest warming regions of the planet, and we urgently need to understand the impact of polar ice melt and its effect on climate, global ocean circulation, sea level, and the functioning of the ecosystems that regulate the planet’s life support systems,” reads a description on the Research Council website.

Voting is not over yet, and it’s uncertain whether the Research Council will even make good on their promise to go with the public’s choice, but if they do, the ship is looking likely to end up with “Boaty McBoatface.”

As of Sunday morning, “Boaty McBoatface” has a significant lead in the votes, with 21,192—far ahead of the second most popular nomination, “Henry Worsley,” at 2,720. Henry Worsley was a British explorer who died in January trying to make the first solo crossing of Antarctica.

At number 3 is “Pillar of Autumn,” a ship from the popular game Halo.