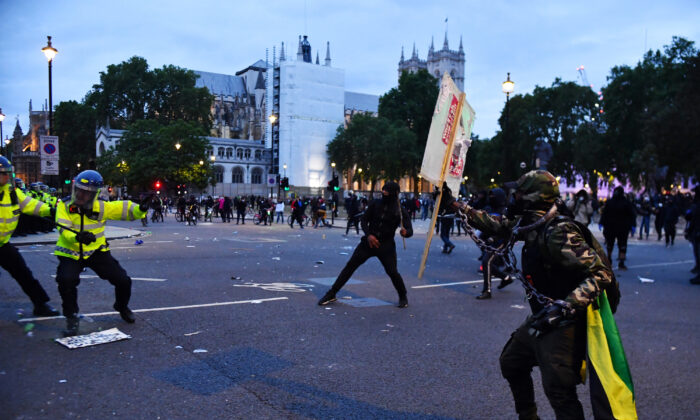 Tens of thousands took to the streets across the UK on Sunday, with peaceful, George Floyd-inspired demonstrations at times turning violent against people and property, with statues of historic figures defaced or torn down.

Protests sparked by Floyd’s police-custody death in Minneapolis have spread across the world, with the ire of protesters in Europe directed against prominent figures in the continent’s colonial past.

Throngs of protesters took to the streets of London for a second day on Sunday, while cities across Britain—including Bristol, Manchester, Wolverhampton, Nottingham, Glasgow, and Edinburgh—were also rocked by demonstrations, ostensibly against racism and police brutality but which some politicians have denounced as “mindless vandalism.”

Protesters in Bristol toppled the statue of Edward Colston, a 17th-century English politician and slave trader, before dragging it through the streets and throwing it into the harbor.

Bristol Mayor Marvin Rees told BBC that Colston’s statue would eventually be fished out of the water and placed in a museum along with placards that were left around the plinth, some of which read “No Justice, No Peace,” and “Black Lives Matter.”

Rees said in the interview that while he does not condone “criminal damage,” the events were part of a “historical moment in Bristol.”

In separate remarks to The Telegraph, Rees said that, as a descendant of enslaved Jamaicans brought to England against their will, he found the statue of Colston “offensive.”

“The other truth that we hold is that this is a rebellious city,” Rees said, adding that residents have a history of rising up against injustice. He dismissed claims from central authorities that the events were “just about mindless vandalism,” arguing instead that politicians should seek to understand the demonstrators’ grievances and “engage.”

Police said eight officers were injured in London and 12 people were arrested Sunday, mostly for disorderly conduct, though one arrest was for criminal damage, according to the BBC.

The Metropolitan Police’s Superintendent Jo Edwards was cited by the British news outlet as saying that after a “predominantly peaceful protest,” police faced “scenes of violence and disorder.”

Protesters in London threw bottles and flares and chanted, “Black lives matter!” as they tried to push through a line of riot police.

One officer with a bloodied head was helped by colleagues.

British Prime Minister Boris Johnson said that while people have the right to protest peacefully, the demonstrations have been “subverted by thuggery.”

“They are a betrayal of the cause they purport to serve. Those responsible will be held to account,” he wrote on Twitter, denouncing attacks on police.

A “Black Lives Matter” sign was taped to a statue of Winston Churchill, which was also sprayed with graffiti.

“There are clearly some people who would rather have the fight than win the argument,” he wrote on Twitter. “Violence, vandalism, etc plays right into the hands of racists who feel that black people don’t deserve/can’t handle equality,” he added.

Cleverly shared a video of a group of police officers retreating as demonstrators charged toward them, throwing items and, in one case, taking a swing with what appeared to be a long metal object.

“Huge respect for the young woman trying to calm things down,” Cleverly captioned the video, referring to a woman who confronted the crowd and urged calm.

Huge respect for the young woman trying to calm things down.

On June 6, thousands gathered in central London in a demonstration that was peaceful but ended with small numbers of people clashing with mounted police near Johnson’s Downing Street residence.

London police chief Cressida Dick said 27 officers were injured in “shocking and completely unacceptable” assaults during protests over the past week, including 14 on June 6.

Two were seriously hurt and an officer who fell from her horse underwent surgery.