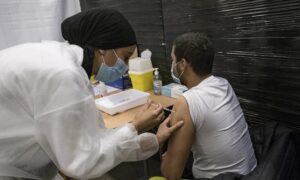 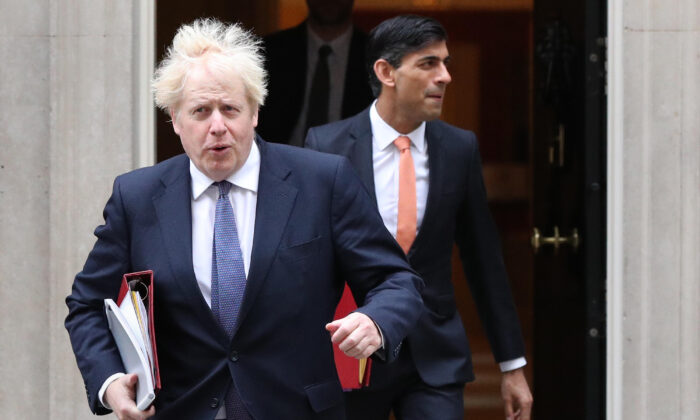 The UK’s Prime Minister Boris Johnson and Chancellor of the Exchequer Rishi Sunak are self-isolating after Health Secretary Sajid Javid tested positive for COVID-19, the disease caused by the CCP virus.

The ministers were initially planning to take daily tests rather than self-isolate following meetings last week with Javid, but subsequently dropped the plan after a furious political backlash.

“The prime minister has been contacted by NHS Test and Trace to say he is a contact of someone with COVID,” a spokesman from 10 Downing Street said on July 18.

“He was at Chequers when contacted by Test and Trace and will remain there to isolate. He will not be taking part in the testing pilot,” he said, reversing a previous statement from just hours before that Johnson would take part in a pilot programme in which participants who came in close contact with someone who tests positive for COVID-19 may take daily rapid tests instead of self-isolating for 10 days.

“He will continue to conduct meetings with ministers remotely. The chancellor has also been contacted and will also isolate as required and will not be taking part in the pilot.”

“Whilst the test and trace pilot is fairly restrictive, allowing only essential government business, I recognise that even the sense that the rules aren’t the same for everyone is wrong,” the chancellor wrote.

“To that end, I’ll be self-isolating as normal and not taking part in the pilot.”

All legal restrictions in England to curb the spread of the CCP virus are to be lifted on Monday, with the exception of self-isolation for people that test positive for COVID-19 and those who come into close contact with someone testing positive.

With the Delta variant of the CCP virus reportedly spreading in the UK, over half a million people were “pinged” by the NHS app during the first week of July, causing concerns over a “pingdemic.”

A number of opposition party leaders had criticised the government after Downing Street announced that Johnson and Sunak were to participate in the testing pilot.

Deputy Labour leader Angela Rayner accused the government of treating “the public with contempt,” and thinking “they are above the law and that the rules don’t apply to them.”

Shadow Health Secretary Jonathan Ashworth called the little-known pilot a “special treatment or VIP lane,” while Liberal Democrat leader Ed Davey also said, “It is one rule for them and another rule for everyone else.”

Robert Jenrick, the secretary of state for Housing, Communities, and Local Government, told Sky News that he appreciates the frustration people might feel upon hearing ministers joining a pilot programme that’s not “available to the wider general public yet.”