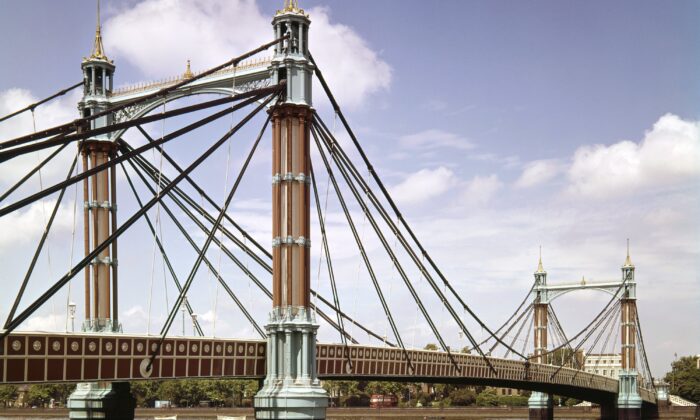 The Independent Office for Police Conduct (IOPC) has appealed for witnesses after a man jumped into the River Thames in London and died after a Taser was used on him on Saturday.

The IOPC has not named the 41-year-old man who jumped into the Thames from Chelsea Bridge and later died after the Taser was used several times.

Video footage of the incident, which has been circulating on social media, shows a black man wielding a screwdriver and screaming incoherently at the two Metropolitan Police officers. They appear to Taser him three times but he gets up each time and eventually runs off, climbing over a barrier and then jumping off the bridge.

The man was later found in the water but died in hospital on Saturday evening.

IOPC Regional Director Sal Naseem said: “We have an independent investigation under way, which is looking at the interaction between officers and the man on the bridge. While we have footage we would appeal to people to get in touch with us without delay if they saw or recorded any part of the incident, either on the bridge, after the man came to be in the water, or at Lambeth pier when the man was taken there. We would also urge anyone who was on a boat near the bridge at around that time on Saturday morning to contact us.”

Social commentator Michael Morgan posted mobile phone footage of the incident on Twitter and wrote: “The Met Police have a lot to answer for. Black people beware, they will use a taser on us without a moments hesitation. The UK’s biggest gang is still institutionally racist.”

But Chris Hobbs, a retired Metropolitan Police officer, told The Epoch Times: “The accusation of racism is arrant but predictable nonsense.”

The IOPC said their investigators had done a CCTV trawl and had obtained mobile phone footage filmed on the bridge as well as images from the officers’ body-worn video cameras.

The Taser that was deployed has been “gathered for analysis” and the coroner has been informed and is arranging a post mortem examination.

The incident comes a year after PC Benjamin Monk was jailed for eight years for the manslaughter of former English Premier League footballer Dalian Atkinson, who had a Taser used on him for 33 seconds and then kicked in the head during a confrontation in Telford, Shropshire, in 2016. Atkinson had suffered mental health problems for some time.

Hobbs said: “Dalian Atkinson was a tragic incident and I’ve no idea what possessed that officer to act as he did. The horrendous scene they encountered was no justification. Officers get a degree of training re: mental health issues but they are not mental health professionals. Officers will generally try and deescalate but it depends on the situation.”

He pointed out the Met received 40,000 calls a year which were linked to mental health and he said the public were not privy to details about what happened prior to the footage.

Met Commander Alexis Boon said: “My thoughts are with the family of the man at this very difficult time. I offer my sincere condolences to them for their tragic loss. Officers go to work every day to keep the public safe, and so any incident in which a person comes to harm following contact with police is understandably concerning.”

Hobbs said of the Chelsea Bridge incident: “Had I been those officers I never would have considered the possibility that this individual would even consider jumping over two barriers and then into the river. The officers made a split-second decision based on the scenario they were faced with.”

He said usually people who have Tasers used on them are immobilised to such a degree that they can be handcuffed.

Guidelines to police officers in England and Wales on how to use conducted energy devices—Taser is a brand name—are regularly updated.

In April this year the College of Policing updated their advice following a report by the IOPC into the use of a Taser on Desmond Mombeyarara at a petrol station in Stretford, Manchester.

In May 2020 mobile phone footage went viral of Mombeyarara having the Taser used on him seven times in front of a 5-year-old child after being stopped for speeding.

The IOPC’s report into the incident later concluded: “While the evidence did not indicate the man had been treated less favourably due to his race, we did find learning for the officers regarding frequent references to a person’s strength or size when justifying use of force as this can align to commonly held stereotypes and increase the likelihood of force being used against black men.”

Mombeyarara was given an 18-month conditional discharge and fined £420 ($526) for resisting a constable in the execution of their duty.