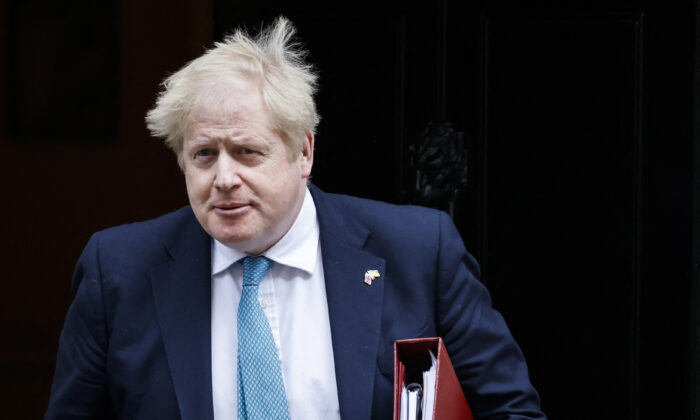 British police said the first 20 fines over alleged lockdown-breaching parties in Downing Street and Whitehall were set to be issued on Tuesday.

Prime Minister Boris Johnson has been plagued by a series of damaging allegations of parties and other gatherings held in his official residence at Number 10 Downing Street and other government departments in Whitehall at the height of the CCP (Chinese Communist Party) virus pandemic, in violation of lockdown rules written by the government.

The Metropolitan Police said on Tuesday that 20 “fixed penalty notices” will be referred to the ACRO Criminal Records Office, which will then be responsible for issuing the fines.

In a statement, Scotland Yard said, “The investigation into allegations of breaches of COVID-19 regulations in Whitehall and Downing Street has now progressed to the point where the first referrals for fixed penalty notices (FPN) will be made to ACRO Criminal Records Office.”

It said further referrals could be made in the future “if the evidential threshold is made.”

The issuing of the fixed penalty notices means the police have ruled the law was broken.

But Downing Street has denied the prime minister misled the House of Commons when he told MPs that the COVID-19 regulations had not been broken in Number 10.

“At all times he has set out his understanding of events,” the prime minister’s official spokesman said.

The spokesman said Downing Street had not been informed by the Met that Johnson was among those being referred to the ACRO Criminal Records Office.

He refused to be drawn on whether Johnson would resign if he did get a fine, and also declined to say whether fined individuals can carry on working in Number 10.

In response to the Met’s announcement, Angela Rayner, deputy leader of the main opposition Labour Party, said the so-called “partygate” saga had been a “slap in the face” for the public.

She said, “After over two months of police time, 12 parties investigated and over a hundred people questioned under caution, Boris Johnson’s Downing Street has been found guilty of breaking the law.”

Rayner repeated her call for Johnson to resign.

“The culture is set from the very top. The buck stops with the prime minister, who spent months lying to the British public, which is why he has got to go,” she said.

Calls for Johnson to quit over the scandal also came from his own backbench Conservative MPs, but in recent weeks the war in Ukraine has seen Tory MPs rally round their leader.