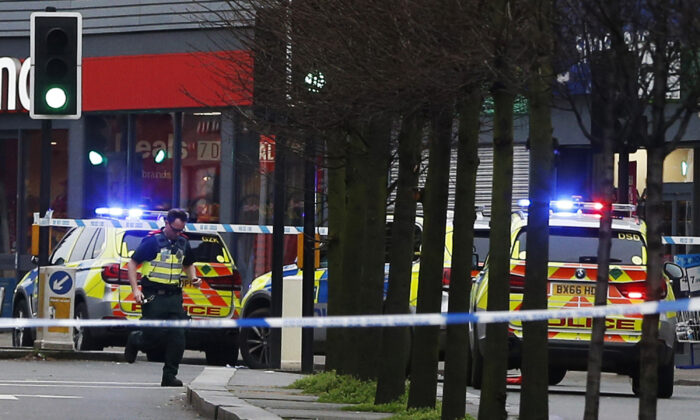 Police officers at the scene after a man was shot and killed by armed police in London, England, on Feb. 2, 2020. (Hollie Adams/Getty Images)
Europe

After Attack in London, UK Police Say Suspect Was Previously Convicted for Terrorism

Several people were stabbed in a terror-related incident in South London, prompting police to shoot and kill the suspect, according to the Metropolitan Police in a series of statements on Sunday.

In an update, police said that three people were injured in the incident, according to reports.

“The incident was quickly declared as a terrorist incident and we believe it to be Islamist-related,” Metropolitan Police Deputy Assistant Commissioner Lucy D’Orsi said.

D’Orsi said there was a bomb that was apparently strapped to the assailant’s body. But it was quickly determined to be a hoax, reported The Associated Press.

“Three victims have been taken to south London hospitals. One man is being treated as life-threatening, one woman has non-life threatening injuries and another woman has minor injuries,” D’Orsi added.

The suspect in the case was identified as Sudesh Amman, who was previously convicted of terrorism-related offenses, officials told The Telegraph, the BBC, and the Guardian.

Prime Minister Boris Johnson said his government would further plans for “fundamental changes to the system for dealing with those convicted of terrorism offenses” starting on Monday.

In an earlier statement, Metropolitan Police said the suspect died after being shot by police. “A man has been shot by armed officers in #Streatham. At this stage it is believed a number of people have been stabbed. The circumstances are being assessed; the incident has been declared as terrorist-related,” police wrote in a statement on Sunday.

Images posted on social media showed the body of a man lying on the pavement as police had their guns drawn.

#INCIDENT A man has been shot by armed officers in #Streatham. At this stage it is believed a number of people have been stabbed. The circumstances are being assessed; the incident has been declared as terrorist-related. Please follow @metpoliceuk for updates

London Mayor Sadiq Khan urged for resolve following another terrorist another attack in the city.

“Terrorists seek to divide us and to destroy our way of life,″ he said in a statement. “Here in London we will never let them succeed.”

According to Britain’s Security Service, the current terrorism-related threat level in the United Kingdom is classified as substantial, meaning that a terrorist “attack is likely.”

In November, a radicalized man was shot and killed by police after he killed two people near London Bridge. Usman Khan, 28, was identified as the suspect in that case.

The Metropolitan Police Assistant Commissioner Neil Basu said in a statement that Khan was convicted in 2012 for terrorism offenses, adding that he was released from jail “on license.”

“We continue to make fast time inquiries to ensure that no other people were involved in this attack and that there is no outstanding threat to the public,” he said at the time.