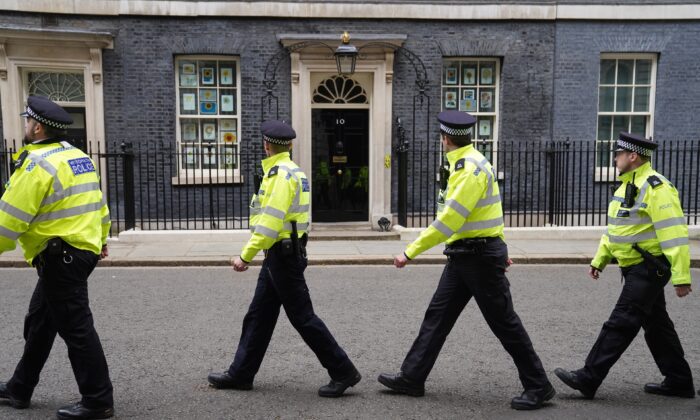 A group of police officers walk through Downing Street, in London, during a protest outside the gates on April 13, 2022. (Stefan Rousseau/PA)
UK

The Metropolitan Police has issued around 50 additional fines for breaches of COVID-19 rules in Downing Street and other government buildings, as the investigation into the so-called “partygate” scandal continues.

The force said on April 12 that more than 50 referrals for fines had been made. Among those fined at the time were Prime Minister Boris Johnson, his wife Carrie, and Chancellor Rishi Sunak, who were issued “fixed penalty notices” for attending a birthday gathering for the prime minister in Number 10 Downing Street in June 2020.

The Met said on May 12 that around 50 more fines have been issued, bring the total number of fines to more than 100. Downing Street later confirmed that Johnson was not among those to be fined this time.

In a statement, the Met said: “As of Thursday May 12, Operation Hillman, the investigation into breaches of COVID-19 regulations in Whitehall and Downing Street, has made more than 100 referrals for fixed penalty notices (FPNs) to the ACRO Criminal Records Office.

“These referrals have continued to be made throughout the period since our last update on Tuesday April 12 and the investigation remains live.”

When asked about the extent of law-breaking in Downing Street following the Met announcement, Johnson, who was in Staffordshire for a cabinet meeting, said he was “sure we’ll have plenty to say about that when the thing’s finished.”

There have been ongoing calls for Johnson to resign over the scandal from opposition MPs, as well as his own backbenches, but he has repeatedly said he is determined to “get on with the job.”

In addition to the police probe and an investigation by senior civil servant Sue Gray into the partygate claims, the prime minister is facing a third inquiry by the Privileges Committee into whether he misled Parliament with his repeated assurances that CCP (Chinese Communist Party) virus rules were followed in Number 10.

Following the Met’s announcement of the new fines, Liberal Democrat leader Sir Ed Davey said it shows “the shocking scale of the law-breaking in Johnson’s Downing Street and the extent of his lies.”

“The country cannot afford a prime minister who breaks the law and lies about it. Conservative MPs must find the guts to do what is right,” he wrote on Twitter.

Meanwhile, Sir Keir Starmer, leader of the main opposition Labour Party, has pledged to stand down if he is fined for breaching COVID-19 regulations, after he was filmed last year drinking beer with staff in an office in Durham.