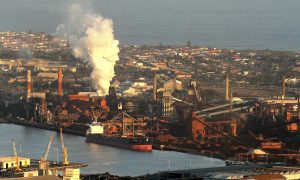 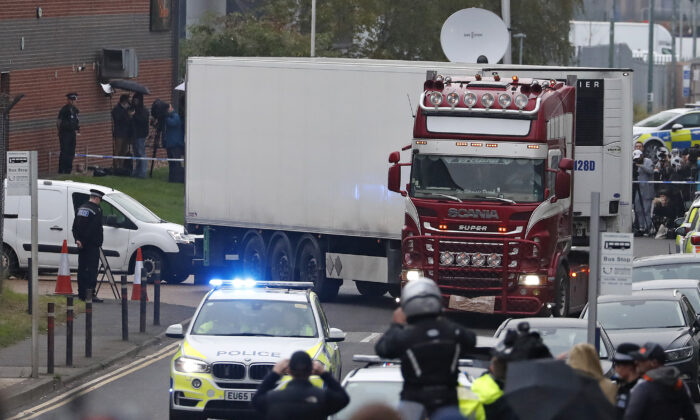 Police escort the truck, that was found to contain a large number of dead bodies, as they move it from an industrial estate in Thurrock, south England, on Oct. 23, 2019. (Alastair Grant/AP)
UK

LONDON—British police released three people on bail on Sunday, Oct. 27 after questioning them in the deaths of 39 people found hidden in a shipping container in southeastern England.

A 38-year-old man, a 38-year-old woman—both from the northern English town of Warrington—and a 46-year-old man from Northern Ireland were questioned on suspicion of manslaughter and conspiracy to traffic people.

The bodies were found early Wednesday in an industrial park in southeastern England.

Essex Police on Saturday charged the driver of the truck, 25-year-old Maurice Robinson of Northern Ireland, with 39 counts of manslaughter, conspiracy to traffic people, conspiracy to assist unlawful immigration, and money laundering. He is to appear in court Monday.

Up to 24 families have reported to local authorities their missing children as of Sunday afternoon, VNExpress website reported. Police said their investigation includes over 500 exhibits, including mobile phones which have to be downloaded to help identify the victims.

“We are working hard to understand how the 39 victims of this tragic incident have died and to identify all those involved,” said Detective Chief Inspector Martin Pasmore. “We remain open-minded as to nationalities of those who have died. We are asking anyone who may have information that may assist us in identification to come forward to us.”