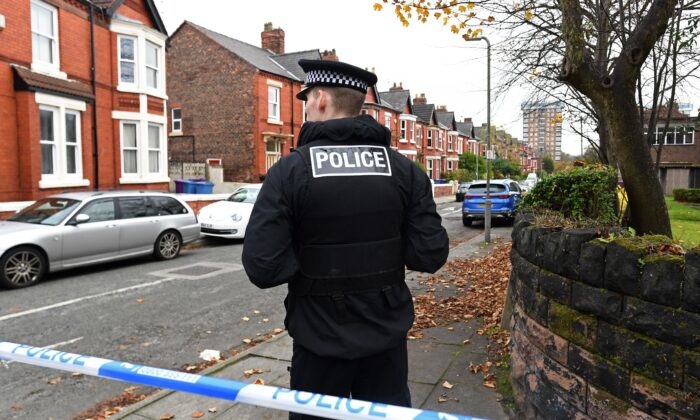 A police officer works inside a cordoned-off area on Rutland Avenue, the place where police have confirmed the passenger of the taxi that later exploded outside the Women's Hospital in Liverpool was picked up, on Nov. 15, 2021. (Paul Ellis/AFP via Getty Images)
UK

British police have said the car explosion in Liverpool on Remembrance Sunday was a terrorist attack, but the motive remains unclear.

A taxi exploded outside Liverpool Women’s Hospital at 10:59 a.m. on Sunday, around a mile away from the city’s cathedral where a large Remembrance service was taking place. The male passenger of the car was declared dead at the scene, and the taxi driver was injured and taken to hospital for treatment.

Speaking to journalists on Monday, Assistant Chief Constable Russ Jackson, from Counter-Terrorism Policing for the North West, said, “Although the motivation for this incident is yet to be understood, given all the circumstances it has been declared a terrorist incident and counter-terrorism policing are continuing with the investigation.”

So far four men have been arrested under terrorism laws in the Kensington area of Liverpool—three aged 21, 26, and 29 who were held on Sunday, and a man aged 20 who was detained on Monday.

According to Jackson, the man who died in the blast brought a homemade bomb with him into a taxi and asked to be taken to Liverpool Women’s Hospital. As the car reached the passenger drop-off point, it exploded.

“Our inquiries indicate that an improvised explosive device has been manufactured and our assumption so far is that this was built by the passenger in the taxi,” he said, adding, “The reason why he then took it to the women’s hospital is unknown, as is the reason for its sudden explosion.”

Jackson said the police are “aware that there were Remembrance events just a short distance away” and the blast took place shortly before 11 a.m., when the two-minute silence was set to be observed at the Remembrance ceremony. He said police “cannot at this time draw any connection with this,” but it is a line of inquiry being pursued.

He said police know the identity of the attacker but will not confirm it at this stage. Officers are searching two addresses in the city, where “significant items” have been found, he said.

The driver of the cab, named locally as David Perry, was treated in hospital after fleeing the car just before it burst into flames, and has now been discharged.

A friend of his claimed on Facebook that Perry got out of his cab and locked the man in the vehicle after apparently noticing an explosive device.

Prime Minister Boris Johnson on Monday praised him for behaving with “incredible presence of mind and bravery.”

Speaking on BBC Radio 4’s “Today” programme, Liverpool Mayor Joanne Anderson said, “The taxi driver, in his heroic efforts, has managed to divert what could have been an absolutely awful disaster at the hospital.”