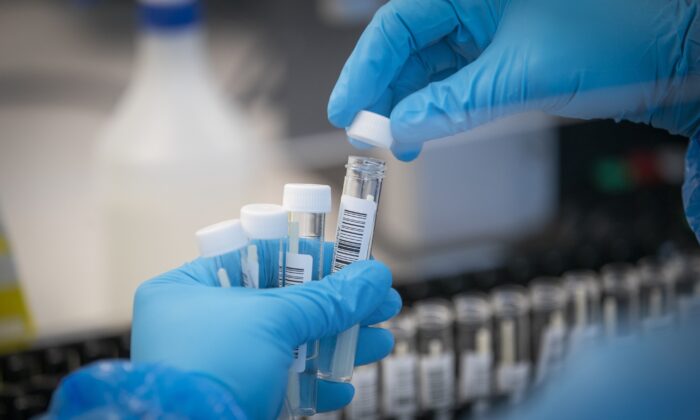 UK police have appealed to the public for information after a COVID-19 test and trace centre in Milton Keynes was disrupted by a group of protesters on Wednesday.

One man was filmed throwing two traffic cones at the entrance of a marquee set up to administer tests, which seems empty at the time, before tearing and knocking over a sign.

Footage also shows one woman posing for the camera in a pre-fab container used to store test kits, smiling and holding a banner that reads “Reclaim NHS, END JAB Tyranny NOW,” before cheerfully picking up test kits, putting them in a plastic container from the room, taking the container out, and throwing them in a bin nearby. No staff was in the room at the time of filming.

Protesters marching past the test centre shouted “Shame on you,” “Vaccine murderers,” “Genocide” at car park marshalls at the site.

The three-hour rally and march, live-streamed under the title of “Milton Keynes Freedom Rally,” was led by Piers Corbyn—brother of former Labour leader Jeremy Corbyn—and Jeff Wyatt, a former UKIP candidate for the European Parliament.

Before the march, Wyatt told protesters they were going to walk past a vaccination centre that had been visited by Prime Minister Boris Johnson on the same morning, but it’s unclear from the footage if the crowd has done so.

Speakers at the rally spoke against things such as the government’s COVID-19 vaccine push, cashless society, the “New World Order,” and “The Great Reset,” while hundreds of protesters carried placards ranging from “No forced vaccs,” “Freedom over fear,” to “Experimental COVID ‘vaccines’ kill.”

Shortly before the protest ended, Wyatt thanked the police for their “discreet” style of policing on the day, before inviting the crowd for a drink afterward.

Protesters have also marched through the Midsummer Place shopping centre without incidents and disrupted a Jack and the Beanstalk pantomime at the Milton Keynes Theatre.

According to the theatre’s Twitter account, protesters forced their way into the foyer during the matinee performance.

“Although we respect the right to choose whether to have a vaccination, we rebuke the actions taken that saw our staff and patrons frightened and assaulted,” the statement reads.

Matthew Barber, Police & Crime Commissioner for Thames Valley, said it was “appalling” to see the protest “escalate into something much uglier.”

He added that he had spoken to Thames Valley Police (TVP) officers to discuss the police response on Wednesday evening, and said that “criminal offences will be investigated and appropriate action taken,” he said.

“All of the events of today will be reviewed to help plan for future protest events and ensure that colleagues in the NHS can continue their fantastic work in delivering the vaccine roll out,” he said.

TVP said that no arrests had been made, but that they had footage of the incident.

“Thames Valley Police is aware of an anti-vaccination protest that took place in central Milton Keynes this afternoon,” a spokesperson said.

“Where criminal offences have been disclosed, we will take swift action and bring offenders to justice.”

The spokesperson also asked anyone with information to get in contact.

Ministers have also hit out after the incident on Thursday.

“And it is completely unacceptable that conspiracy theorists are intimidating and harassing those administering tests or delivering the life-saving vaccine programme,” Patel wrote on Twitter.

“The police have my full support to take swift action where necessary.”

“I was appalled to see Piers Corbyn and his mob threaten NHS test and trace staff who are working so hard to keep people safe,” Javid wrote on Twitter, adding: “This kind of vile behaviour is unacceptable.”