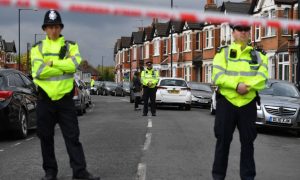 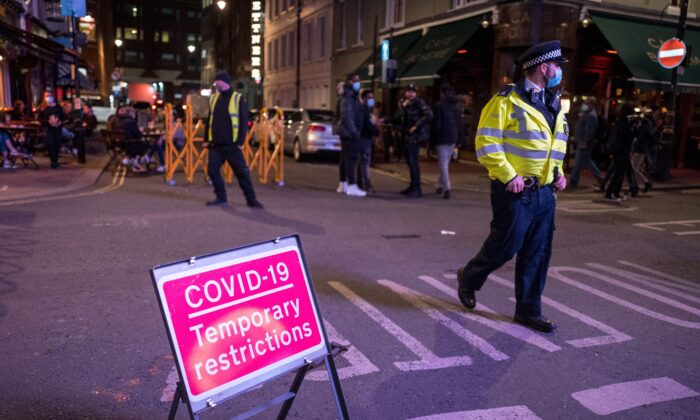 Police patrol in Soho, in central London on Sept. 24, 2020, as the clock nears 10 p.m., on the first day of the new earlier closing times for pubs and bars in England and Wales. (Tolga Akmen/AFP via Getty Images)
UK

Two men were arrested after a gathering of more than 40 people was held in a tearoom in violation of England’s CCP virus lockdown rules, Nottinghamshire police said on Saturday.

The Mustard Seed, a tearoom and Christian bookshop in Gedling, Nottinghamshire, had refused to close despite England’s second national lockdown, which came into force on Nov. 5 to stem the spread of the CCP (Chinese Communist Party) virus, which caused the COVID-19 pandemic.

In a note posted on its door, the management quoted the Magna Carta and cited common law to claim it cannot legally be shut down, according to local media.

On Friday, local government officials from the Gedling Borough Council issued a £1,000 fine to the business for breaking lockdown rules, which stipulate that “non-essential” businesses must close.

On Saturday, after reports the cafe was continuing trading, police officers visited the premises at around 1.45 p.m. to support council officials, the police said in a statement.

Officers were called to the premises again at 4.20 p.m., where they saw the tearoom was locked with 40 to 50 people inside, despite lockdown rules under which such gatherings are banned.

Two men were detained after refusing to give their details when officers attempted to give them £200 fixed penalty notices for breaching COVID-19 regulations.

“The lockdown legislation is intended to prevent the spread of COVID-19 and protect the NHS,” Chief Inspector Rob Shields of Nottinghamshire Police said. “Most people across the county have been playing their part in minimising the spread of the virus but sadly there remain a few people who refuse to adhere to our efforts to engage, explain and educate and consequently we will not hesitate to enforce the regulations.”

The Mustard Seed shop and cafe had argued that the current lockdown measures were “unlawful”.

According to local media, in a note on the shop’s front window, it said, “As the business owners, we are exercising our rights to earn a living.”

“Under Article 61 of Magna Carta 1215, we have a right to enter into lawful dissent if we feel we are being governed unjustly,” it said.

“Contrary to common belief, our sovereign and her government are only there to govern us and not rule us. This must be done within the constraint of our common law and the freedoms asserted to us by such law. Nothing can become law in this country if it falls outside of this simple constraint.”