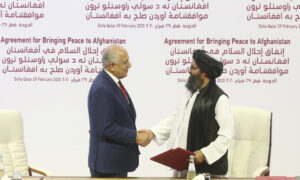 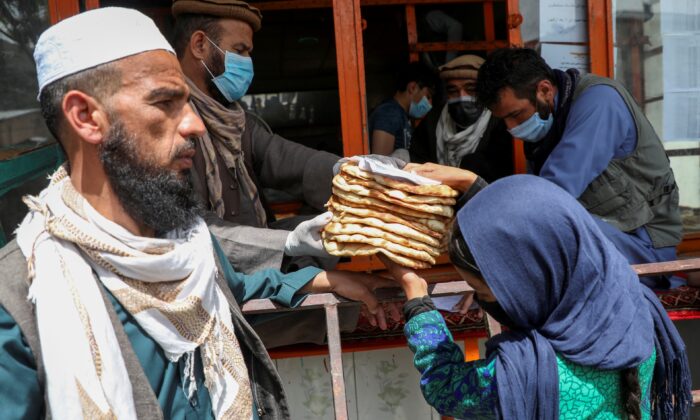 An Afghan girl receives free bread distributed by the government, outside a bakery, during the CCP virus disease (COVID-19) outbreak in Kabul, Afghanistan, on May 3, 2020. (Omar Sobhani/Reuters)
International

The UK on Tuesday pledged a £155 million ($206.5 million) support package for 2021, to help reduce child mortality rates, and improve access to education and vital infrastructure in Afghanistan.

This aid package, and an additional £15 million ($19.98million) to help alleviating food shortages, came on top of a £70 million ($93.26 million) security pledge announced last month for Afghan National Defence and Security Forces in 2021.

UK Minister for South Asia Lord Ahmad pledged the fund at the 2020 Afghanistan Conference in Geneva, which Ahmad joined online.

The United Nations Assistance Mission in Afghanistan (UNAMA) said that over 50 countries and international organizations were at the meeting to make their pledges known.

During the lead-up to the quadrennial international donors conference, diplomats reckoned Afghanistan could receive 15–20 percent less funding than the roughly $15.2 billion pledged at the last conference in Brussels in 2016 due to uncertainties over the peace process and difficulties securing commitments from governments financially strapped by the CCP (Chinese Communist Party) virus pandemic.

“Despite our suffering, I want to be very clear that our commitment to negotiations with the Taliban remains firm,” Afghan President Ashraf Ghani said, joining the virtual conference in a video link from Kabul.

“We must bring an end to the violence that is haunting our lives and robbing our children of the joys of childhood.”

Also addressing the conference, UN Secretary-General Antonio Guterres called for a ceasefire as soon as possible.

Violence has escalated while negotiators have struggled to make progress since talks began in Qatar in September.

As the conference proceeded, two explosions buffeted a market in the central province of Bamyan, usually considered one of Afghanistan’s safest areas, killing at least 14 people and wounding almost 45, mostly civilians.

Diplomats said keeping financing for Afghanistan on a tight rein could provide foreign governments with some leverage to inject a greater sense of urgency into the peace process.

The EU pledged €1.2 billion ($1.42 billion) for the next four years, “conditional on the continued commitment to democracy, the rule of law, human rights, and gender equality,” Jutta Urpilainen, EU commissioner for international partnerships wrote on Twitter.

“The UK’s pledge, alongside those of other international donors, also takes into account the start of negotiations between the Afghan government and the Taliban and progress toward a peace process,” the UK government said in a statement.

“Continued UK development funding to Afghanistan beyond 2021 will be closely linked to both the peace negotiations and further progress on poverty reduction, rule of law, protection of women and minorities rights, human rights more broadly, and democratic governance.”

The two largest donors for Afghanistan, The United States and Germany will not announce their pledges until later on Tuesday so it was not immediately clear whether overall funding would match the 2016 total.

The United States signed a peace agreement with Taliban militants on Feb. 29, aimed at bringing an end to 18 years of bloodshed in Afghanistan and allowing U.S. troops to return home from America’s longest war.

Pompeo told reporters after the ceremony that the United States was realistic about the peace agreement and is “seizing the best opportunity for peace in a generation.” He said Washington won’t squander what its soldiers “have won through blood, sweat, and tears” and will do whatever is necessary for its security if the Taliban don’t live up to their side of the deal.

The UK’s Defence Secretary Ben Wallace on Thursday said that Britain would likely follow the United States in reducing troop levels in Afghanistan but it will continue to work with its government and the United States to protect the country’s security.

As the negotiations go on between the Afghan government and Taliban, women’s rights remain a concern as it isn’t clear what will become of minute gains made since the toppling of the Taliban, which had repressed women and girls under a strict brand of sharia (Islamic law).

The United States invaded Afghanistan in response to the Sept. 11, 2001, terrorist attacks. Within months, U.S. troops defeated the Taliban and forced the al-Qaeda terrorist group to flee to Pakistan. But the war continued as the United States sought to stabilize the country before withdrawing its forces. The Taliban currently hold sway over half the country.